OK, this is another “non-Airstream travel” post, so I’ll be brief.  I sanded the road side today.  I discovered the bondo my dad found when he installed the hatch doors.  It seems my little boler was in a lane-change mishap or a tree jumped out when it was being parked.  I guess it won’t become a Rat Rod after all. 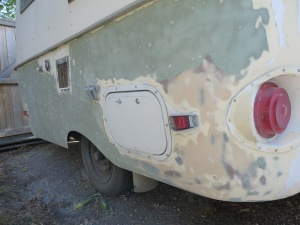 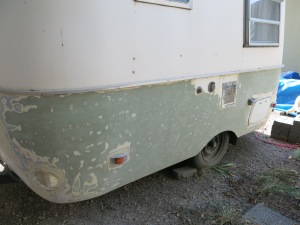 In the spring, I’ll remove the lights, water inlets, etc.  I don’t want to get in over my head this late in the season.

Let there be Green!

I have had my boler for nearly 20 years, but time and money have prevented me from giving it the attention it deserves. When we bought it, it had beige household paint on the lower half (and original gel-coat on the upper half).  We weren’t fortunate like people who get a trailer with unpainted gel-coat. You can remove the oxidation from the gel-coat and buff it to a high gloss. Paul did that for our Surf-Side. It was gorgeous.

However, our boler had a horrible rolled-on paint job. So, in our infinite wisdom and limited funds, we primed and painted it again with a roller. This time, we took it one step further, and sprayed on rock guard on the front before painting. Even with primer, the marine paint never properly adhered to the rock guard.

What a sad looking little trailer! 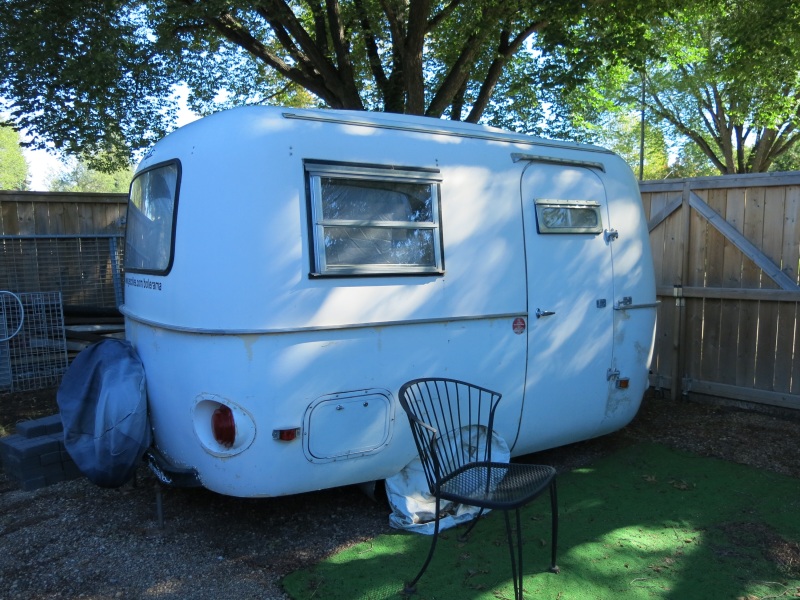 Major flakes over the rock guard 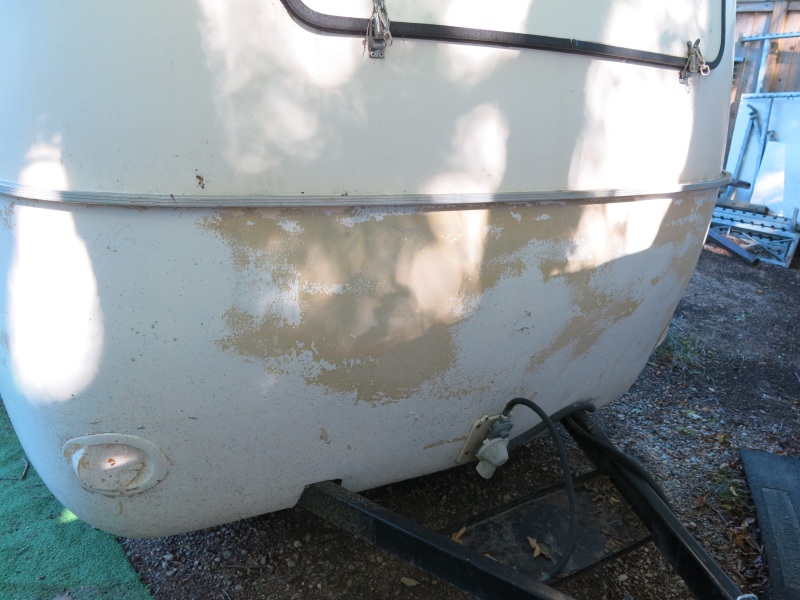 So,  I bought a random orbit sander and got to work today. Wow!  Are my arms, shoulders, and hands tired! I hope I’ll be able to pick up the sander again tomorrow!

I bought a Makita BO5041K because it has two handles. That has really helped.  I used 80 grit sandpaper, but I think I should have gone more aggressive with 60. 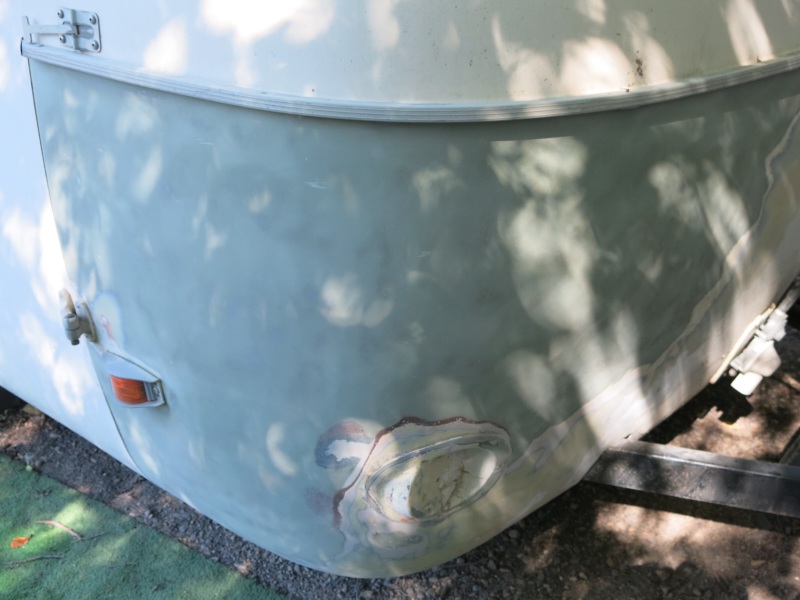 It is very challenging to remove all these layers. 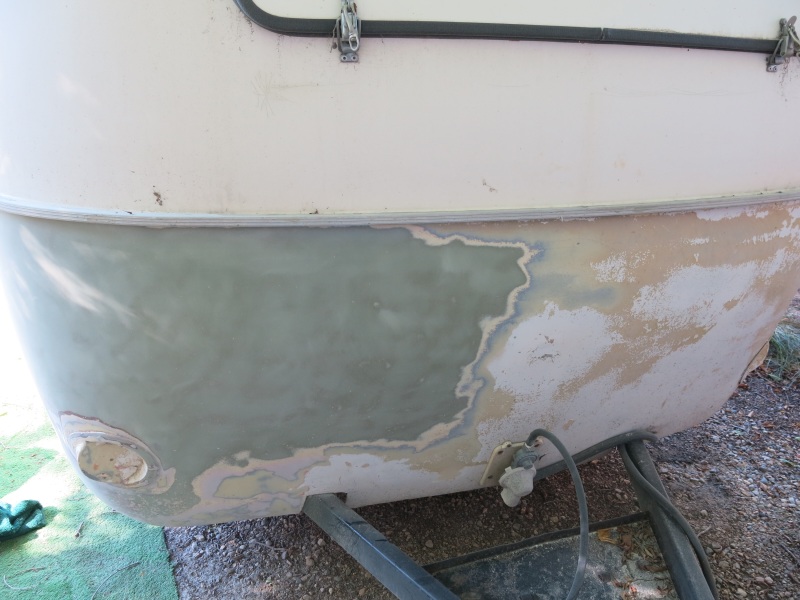 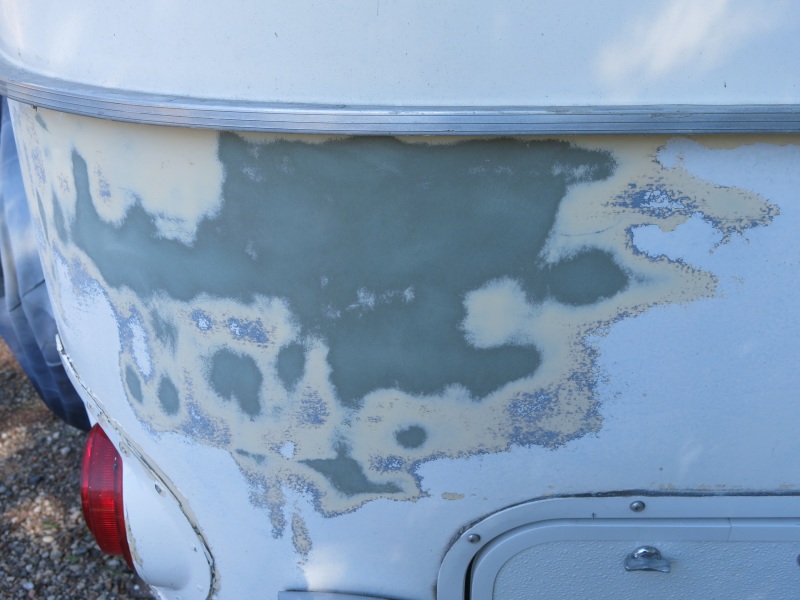 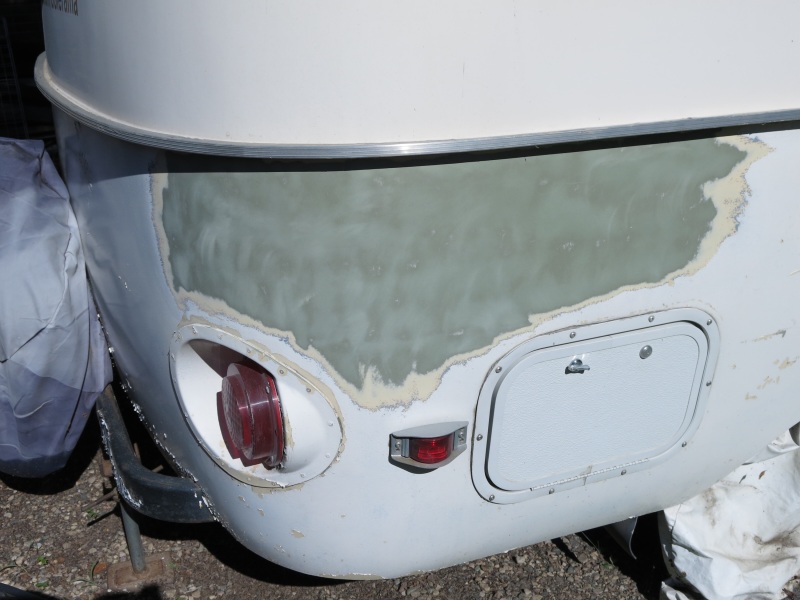 The gel-coat looks surprisingly good. I wonder if we can give this trailer a Rat Rod look. 🙂

We only spent one night at Kikomun Creek P.P., but we will definitely return. At dusk, we started a fire since the ban had just been lifted. There was a boler parked next to us. Then, in the dark, another boler pulled into that same site. They unhitched at started dragging it around the site, trying to find the perfect spot. We were giggling to ourselves, saying “sounds like boler!”  That’s what it sounds like when we move our boler in our yard or in a campsite. They are such wonderful trailers because you can pick up the hitch and drag it around!  I love the simplicity.

In the cool drizzly morning, I took a few pictures of their camp, and then went over to meet them. 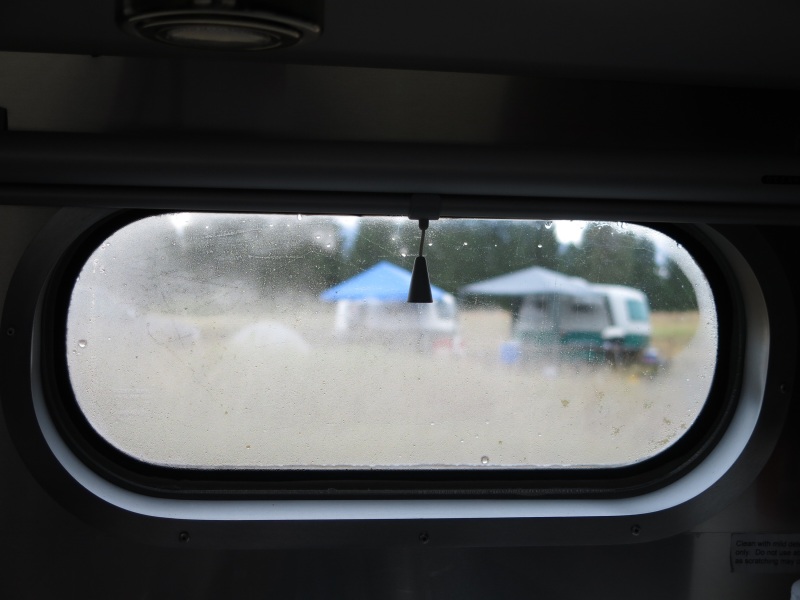 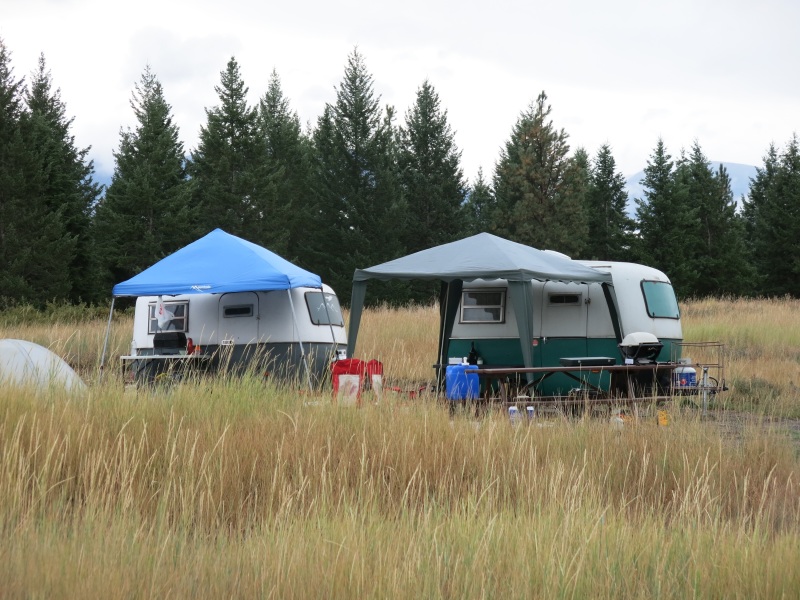 It turns out that I had already met the older couple at a boler meet!  They had my buttons on their curtains. I had brought over buttons to give them and invite them to next year’s meet. The younger couple was their daughter, son-in-law and grand baby. The younger couple didn’t want wedding gifts; they wanted people to contribute to their “boler fund.”  However, the parents had already secretly bought them a boler for a wedding gift!  How touching!

Creepy Barbie near our campsite. This can give nightmares! 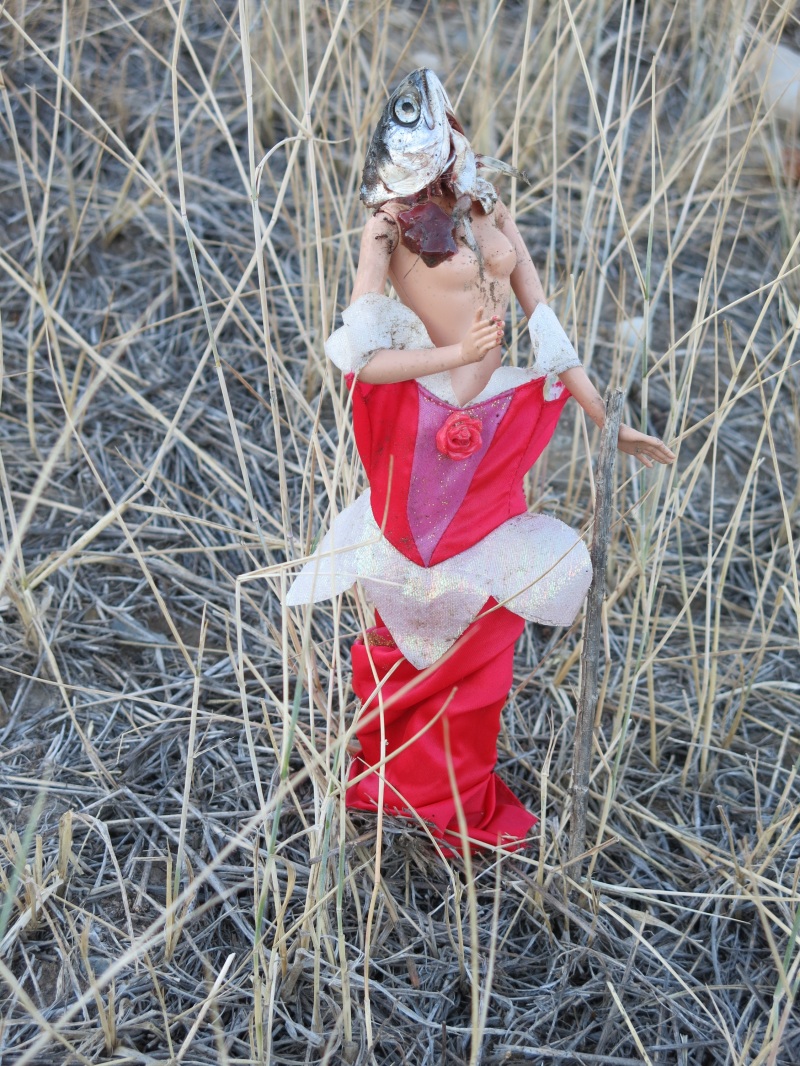 We made our way along Hwy 3 (Crowsnest Highway) and passed Frank Slide. Due to the miserable weather, we just stayed inside this time. In 1903, a rockslide buried the town of Frank, Alberta, killing 76 people and injuring many others. 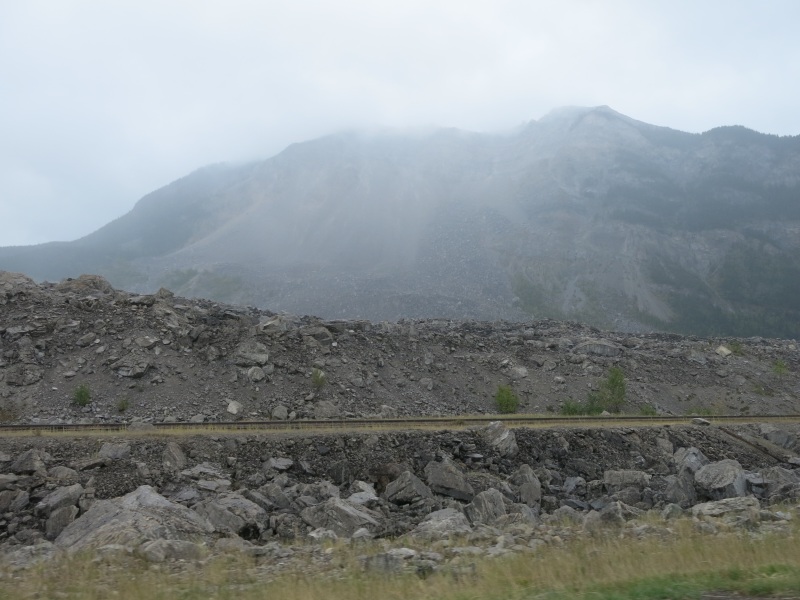 We arrived at the Hands Across the Border rally on Friday, just one day late. The HAB is an annual WBCCI rally between the Montana and Alberta-Saskatchewan units. We were up to our axels in muck, and it was dry camping, but we had a wonderful time with our good friends. The rally was in Bow Island, AB, which is the pinto bean capital of Canada. We had a bean cook-off, so that helped keep our trailers warm. 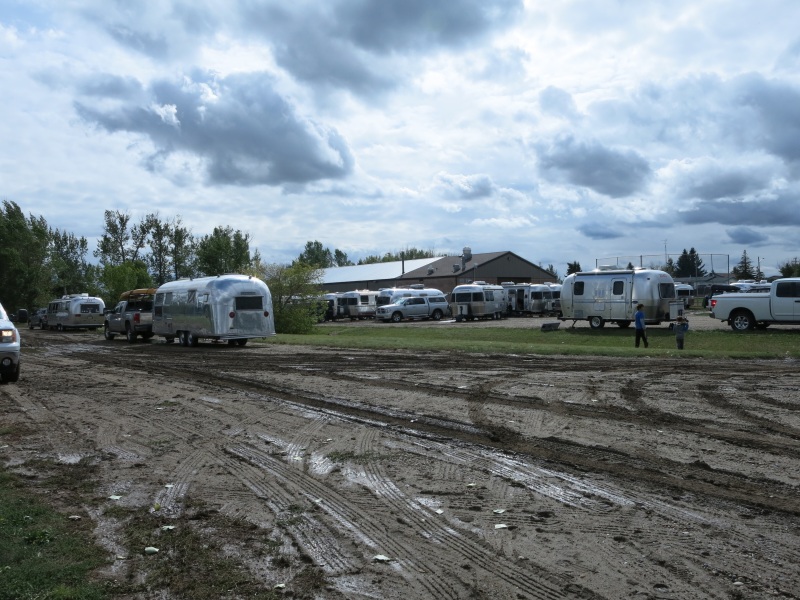 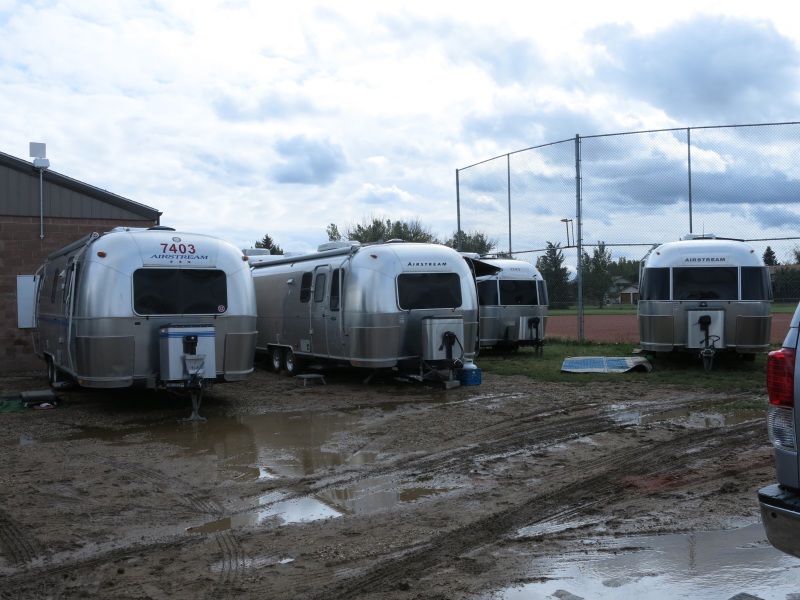 We stopped in Cranbrook at a food truck. I ordered Mac & Cheese and Paul ordered a burger and we were going to share Triple P (Pulled Pork Poutine). Mmmm. There was one girl working there. She put Paul’s patty on the grill, and with raw beef on her fingers, she rung in our order and handed me the machine. Yup. I thought she would wash her hands and start the rest of the meal. Nope. She pulled out some stuff from the fridge, and then took another order, handled their money and carried on. I told Paul I wasn’t eating any of it and to tell her we were leaving. I left. Paul lingered a bit and saw her reach her beef-and-money fingers into the shredded cheese to make my Mac & cheese. Then, he couldn’t take it. By now, there were 7 people after us. He took her aside and said, ” I don’t want to make a scene, so I’ll speak softly, but you haven’t washed your hands while preparing our meals. That’s illegal according to safe food handling regulations. ” She gave us our $29 back and didn’t even blush. What a waste. Did no one else see what was happening?  In SK, food trucks must have 3 sinks, and one is dedicated to hand washing. Good grief.

We didn’t drive far today. We only went a few hours further. We stopped at Koocanusa Lake at Kikomun Creek Provincial Park on a recommendation from a fellow camper in Hedley. We are so glad we stopped. Look at this view. 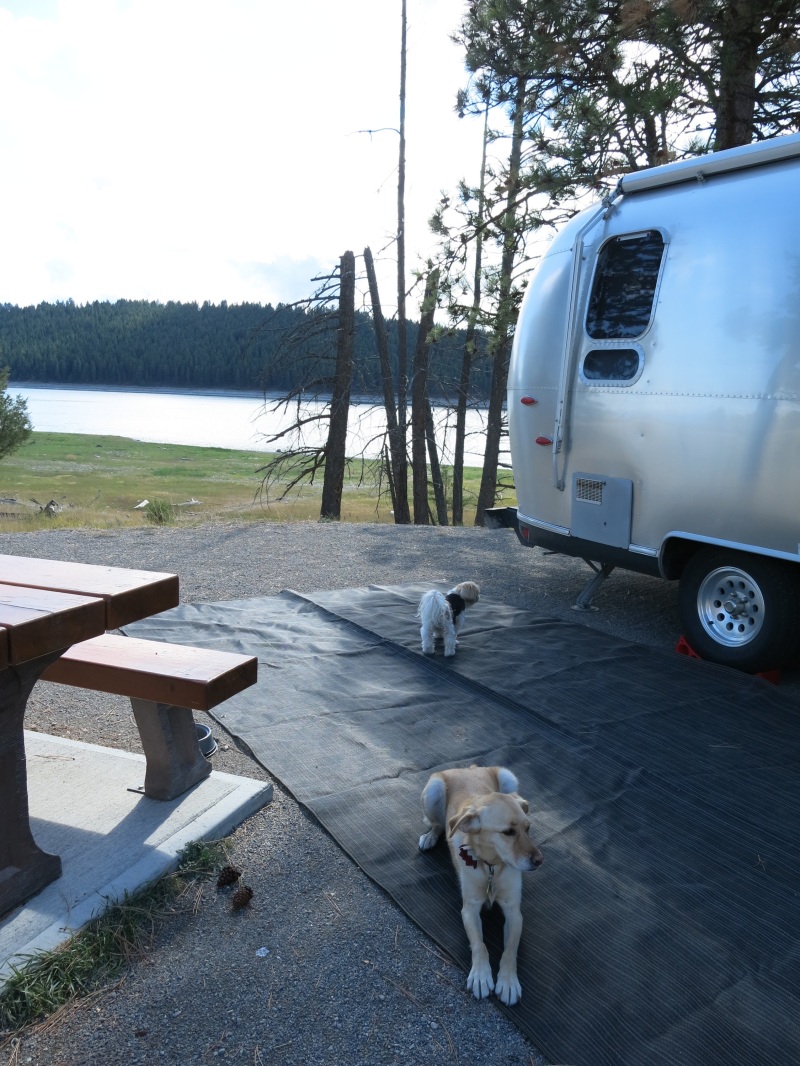 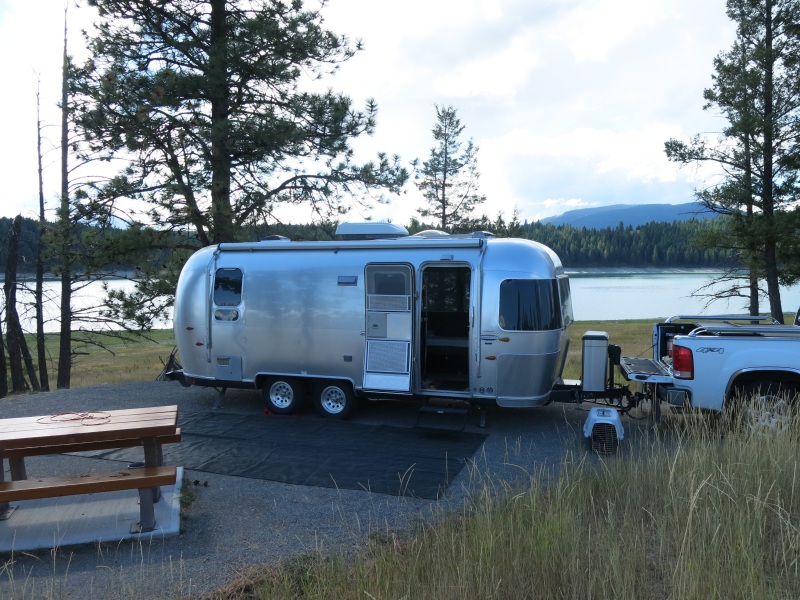 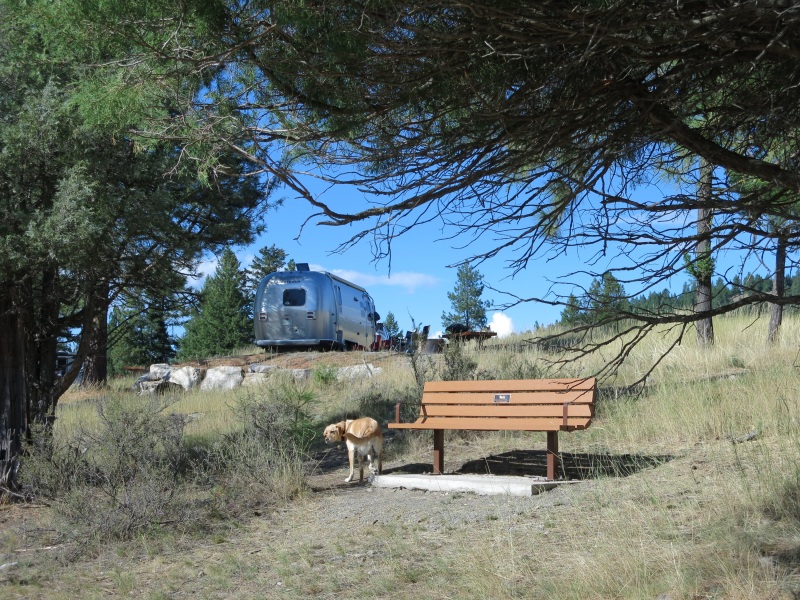 The lakefront sites do not have power, but we are ok with this. It will be cold tonight, though. While we were driving this morning, it was only 5C. Brrr! Does it look cold to you? 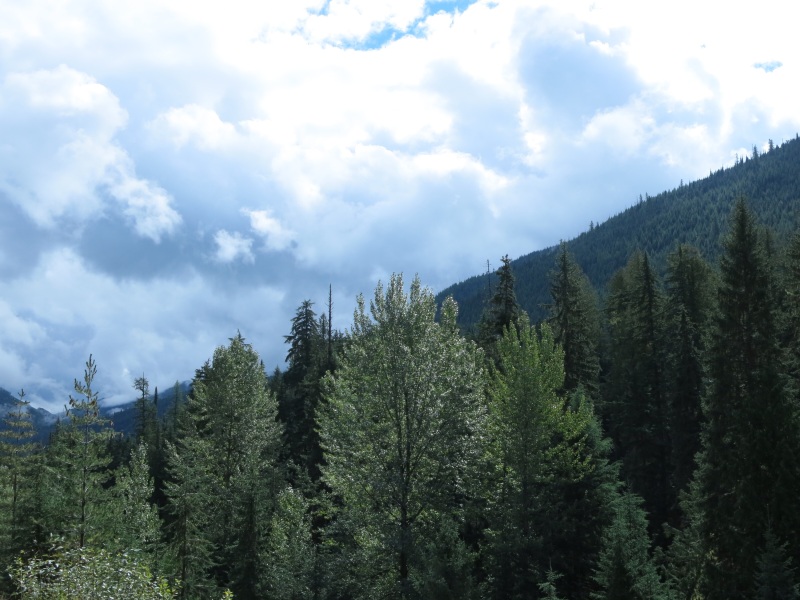 We left Hedley in late morning, so we made it to Osoyoos around lunch time. We stopped at a fruit stand for apples, peaches, honey, garlic, and samosas.  Yes, samosas. We just love Osoyoos and the rest of the Okanagan, but campsites are hard to find this close to the long weekend, and we had to press on to the Kootenays if we are going to make it to the rally in Alberta.

Earlier, I tried to get a campsite at Swiws (pronounced swi-yoos) aka Haynes Point Provincial Park, but it is in hot demand. Haynes Point is a peninsula that juts out into Osoyoos Lake, and the campsites are all lakefront. We drove through the campground once before and made a note of this one.

About one-third from the right, you can see a forest fire burning. On the left side, you can see Haynes Point. 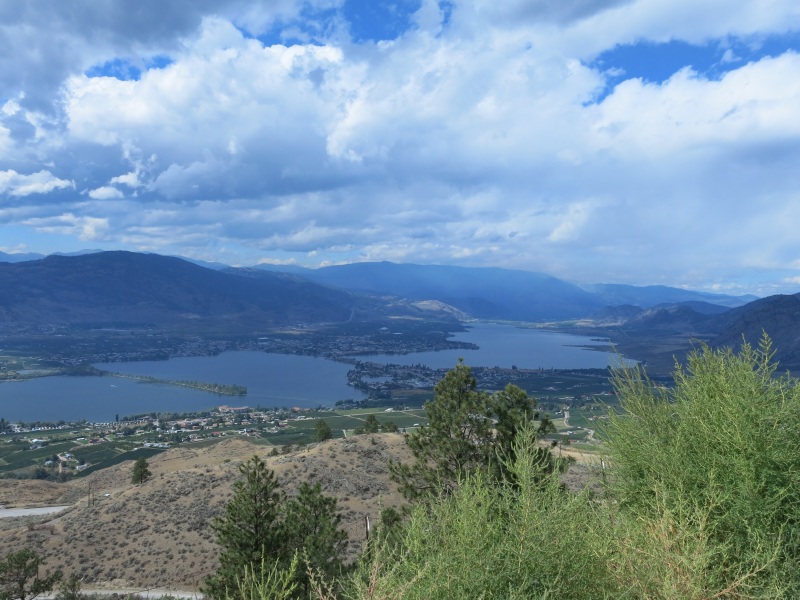 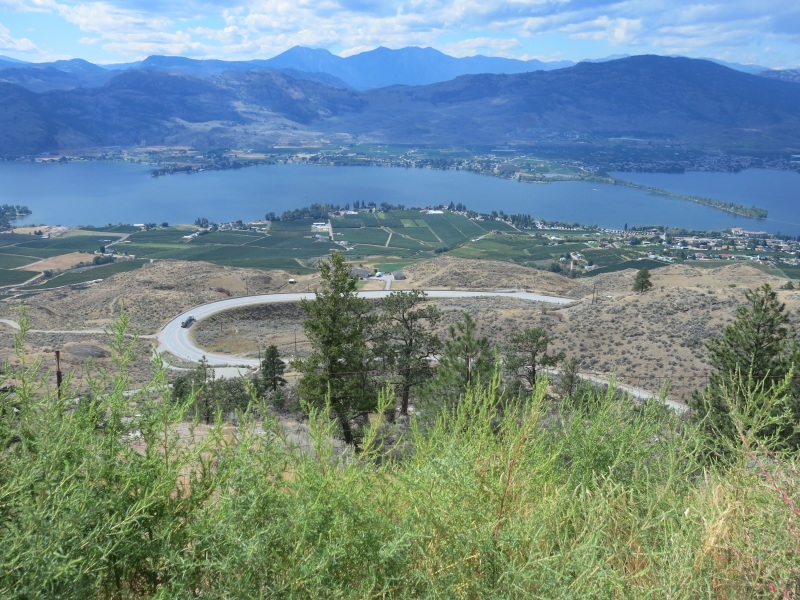 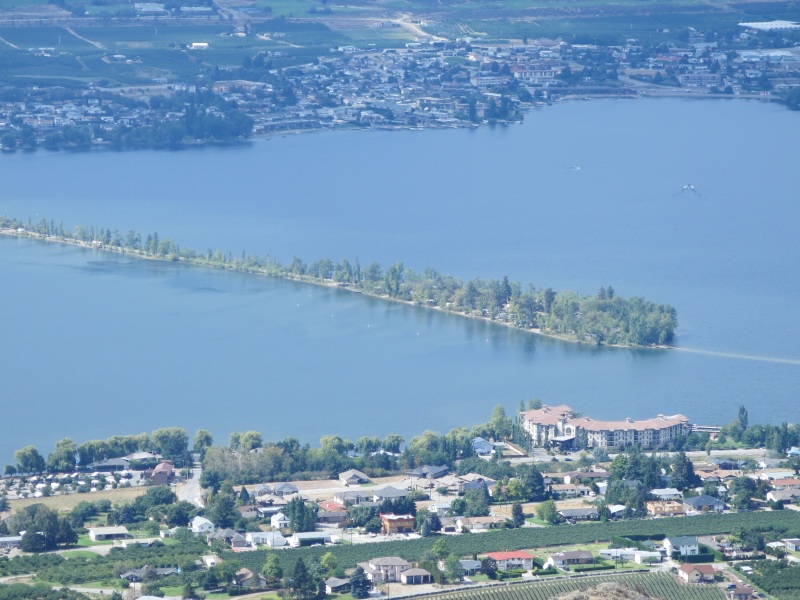 We were going to stop at Christina Lake, but we pressed on. We are now near Salmo.  The campground is nothing special. There is a motel out front and a few full -service sites around back. A British couple own it, and she called Paul “dear.”  She said the the washroom is really clean, and it is. There is a code to get into the one unisex washroom. Inside, there are two sinks, and to the left, a shower, and to the right, a private toilet. You can deadbolt the outer door so that you have it all to yourself. She also has terry towels inside to dry your hands. She’s not into wasteful paper towels.

We will end tonight with Daisy staring at the samosas while she waits for us to finish making dinner. 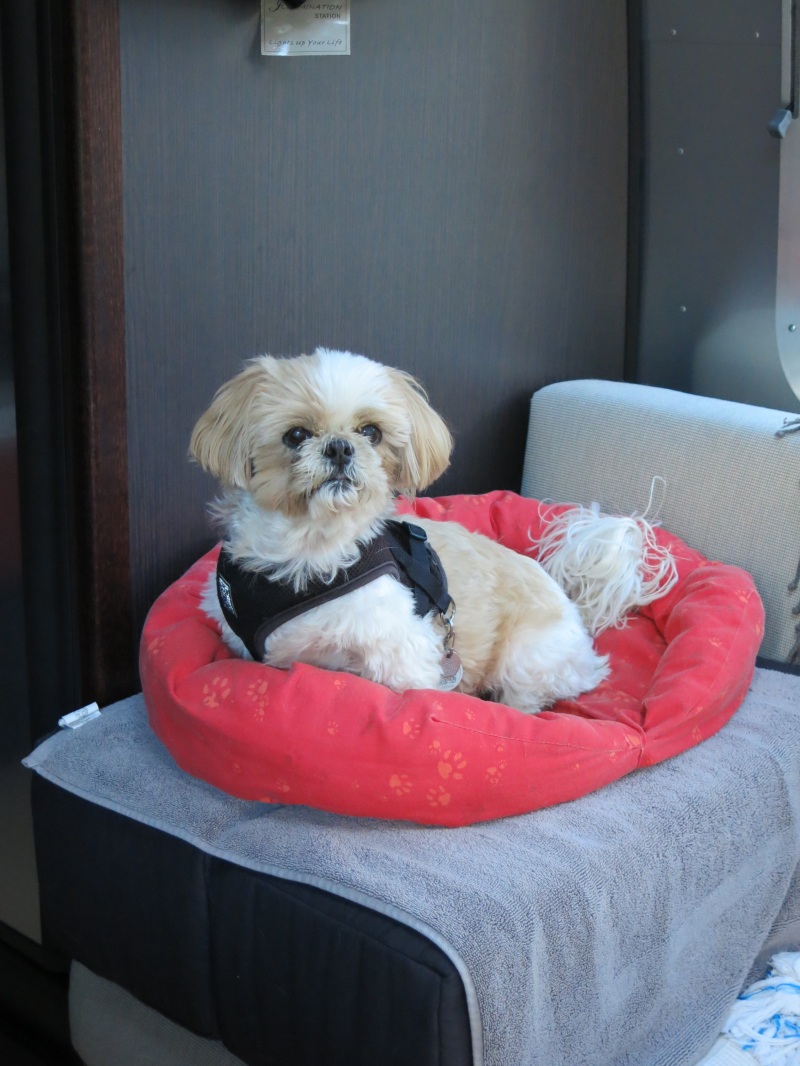 On Sunday afternoon, the power came back on in our section of Burnaby. We were able to do 2 loads of laundry and give Daisy a bath. On Monday, we decided to head back to Hedley to check on one of the campgrounds we viewed in June.

As we pulled into Gold Mountain campground, Paul noticed a big RV at Riverhaven (the one we were interested in buying). The owner of GM said that it all happened so suddenly last week. It was sold and the new owners moved their RV there and were working on it. I felt crushed. Because this was a foreclosure, there was a long process, but for some reason, they didn’t follow the process, and they put in an offer; the bank accepted, and they took possession in a couple of days!  Word is they bought it for $485,000.

The GM owners consoled us and said it was a blessing. As Paul suspected, the pipes had not been drained and blown out. When the new owners turned on the water, the campground flooded, and the man was on the phone yelling at someone. Yesterday, Paul met a man who lives on the other side of GM, and he said that one of he previous owners was a member of Hell’s Angels and that there might be some after effects from that. During my googling of the previous owners, I came across pictures of one of the men always wearing HA insignias. So, maybe our not getting the campground was a blessing, but I feel sad. I love Hedley.

Plan B: fund our retirement through panning for gold

The GM owners provide gold pans for patrons, so that’s what we did yesterday. We had so much fun. I had beginner’s luck and found all of my flakes in my first pan. Paul found one flake in his last pan.  He has a much better technique than I do, but I discovered the flakes get trapped in plant roots.

We will be returning to our day jobs.

Path down to the river from the campground. 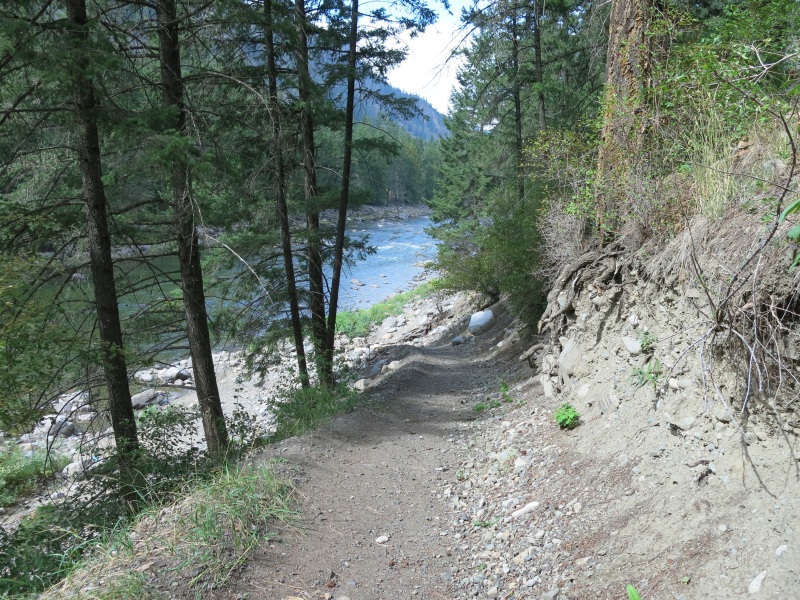 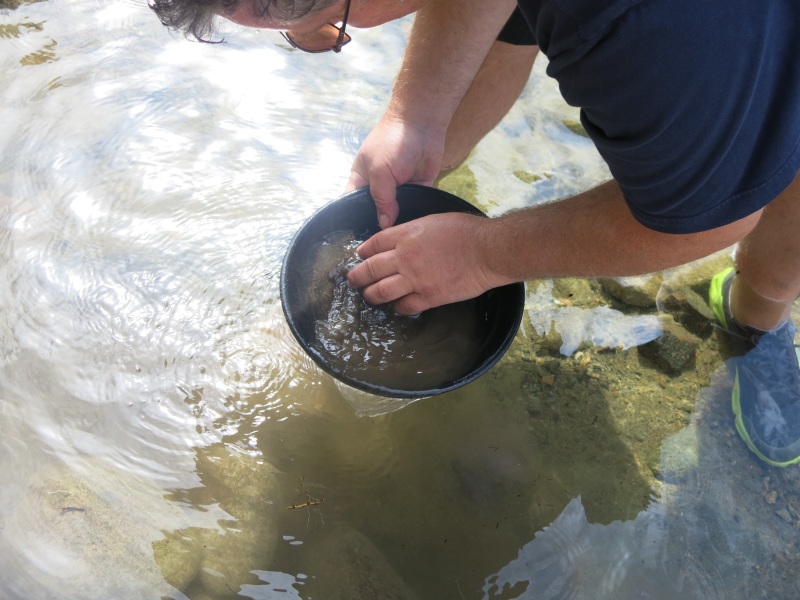 Poppy is waiting for me at the bottom of the path. 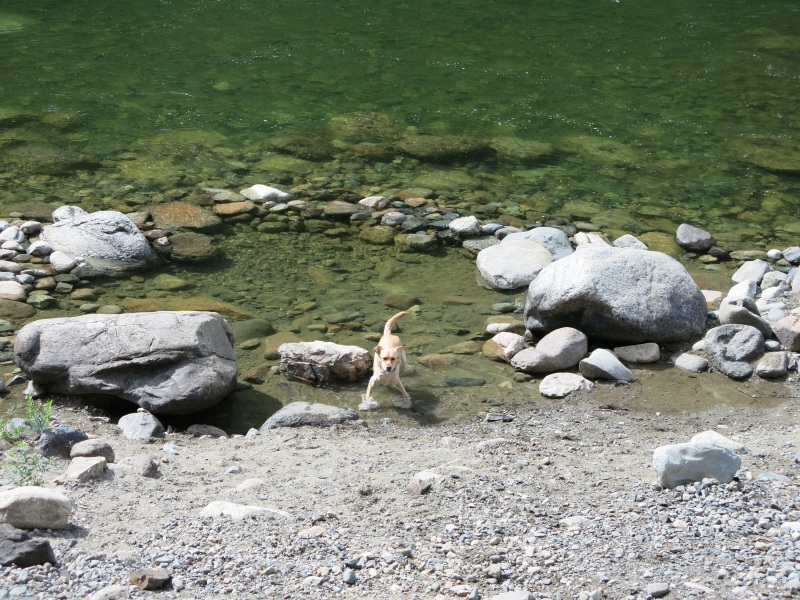 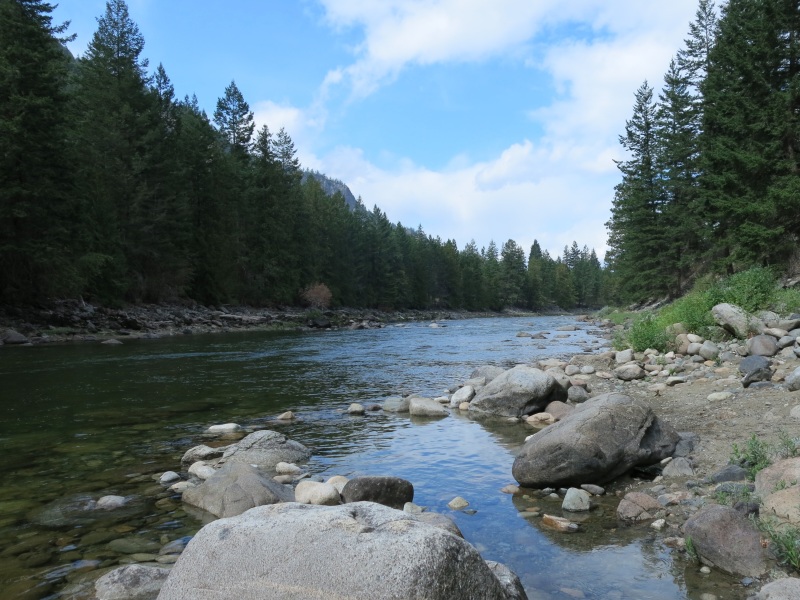