It poured much of the night and morning.  Our friends broke camp this morning and are headed back to Saskatchewan.  We are so thankful for all their expertise on Vancouver and for showing us the key sites.  Since it was pouring, we decided to go to IKEA.

We knew IKEA would be a zoo on the last Saturday before school begins, but we braved the crowds.  The Ballroom was full, which was a bad sign.  We fortified ourselves with the $0.99 breakfast. I had a shopping list of things I wanted for our boler.  When I got to the curtains, I found exactly what I wanted for the boler, but alas, they were sold out.  Then, the power went out.  We were in total darkness.  It was not my usual IKEA sunshine experience.  The generators kicked in and gave us some light and enough power for the tills.  No meatballs for us!   The power outage subdued the cranky kids for a few minutes, but it didn’t last. It wasn’t a “Start the car!” IKEA day, but it still got some goodies.

The ride home was anything but tranquil. Police were directing traffic since the power is out, and there were tree branches everywhere on the highway!  What happened?  We couldn’t turn off on our usual street to get to the campground because a tree had fallen.  We had left our awning out, so we were anticipating a dire scene, but it was surprisingly fine. The trees on the trail outside the campground sustained some damage. We have been without power for about 4 hours.  The police and public service departments are asking people to stay home while they clear highways.  People were told to leave Stanley Park and no one is allowed in.  We hear constant sirens.  Who knew it could be so exciting?

Here are some pictures of the trail from our campground leading to New Westminster.

That man is near the campground entrance to the trail.  We are near the road. 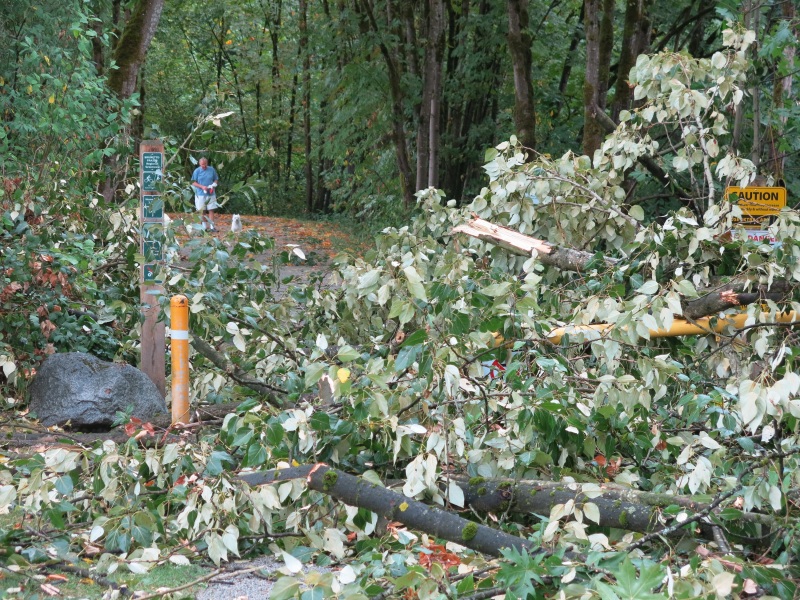 Daisy had to be carried over the debris.

The rain perked up the moss on the trees.

This is one of the sites in the campground.  Thank goodness no one was parked there.

3 thoughts on “Mayhem in Metro”