On the road again

After work, we headed out. This isn’t our only trip since my last post, but the other trips were rallies: The Prairie Egg Gathering/bolerama with the boler, and a WBCCI camp out. Tonight, we only drove for about three hours. We stopped for the night at Camp Wal-Mart Lloydminster. Look at our lovely campsite through the bedroom window.

Actually, we were late to the party, but somehow got the nicest spot, with trees and some flowers and bushes.  The sun was setting as we pulled in. After I made some requisite purchases, it was too dark to photograph the rest of the “campground.”

For those of you who are unfamiliar with the prairie provinces, Lloydminster is a big oil town spanning both Saskatchewan and Alberta, and this is where hillbillies are born. There are jacked up trucks with amplified exhaust systems everywhere. It with be noisier here tonight than being parked next to train tracks.

Parked near us seem to be two permanent campers. Is that legal at Wal-Mart? This is Alberta after all. One is an unhitched 1970s trailer with cracks at all the seams. It is parked with an equally scary slide-in truck camper with duck tape holding its seams. On the back of the slide-in is a flat bed with an off-road mudding truck. I will try to get pictures tomorrow. 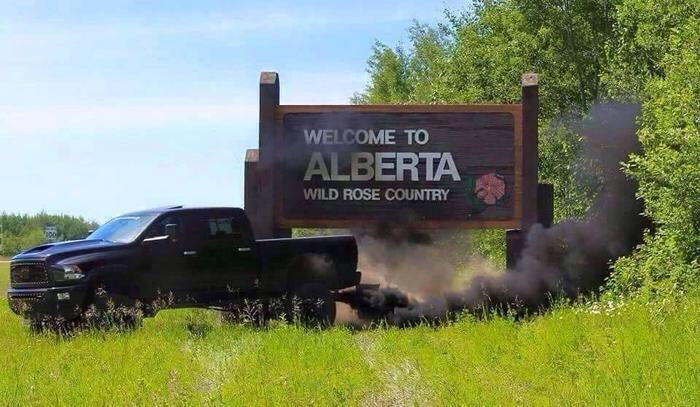 Rolling Coal is the zenith of hillbillification.

4 thoughts on “On the road again”