We crossed the US-Canada border at approximate 10:15 am, which meant that we passed by Can-Am at around noon, but we only did a slow drive-by. We needed lunch. Our official pick-up was scheduled for Friday, so we didn’t know if we’d be able to accomplish much by arriving early, but we were given permission to sleep in the Airstream Thursday night. Our only glimpse all day was of the end of her in a bay. She was still getting her solar panels and extra batteries. We ordered 400 watts of solar and 4 AGM batteries. Some day, we’ll consider lithium batteries, but they are still too expensive. We also had upgraded Michelin tires installed, so she was getting a makeover of sorts.

It didn’t matter that we had to wait. We were in Airstream Wonderland, so all was well – very well, in fact. Ms. Bolerama got to see the new NEST! YES! It is even more wonderful in person than the pictures show. If only I could get one too! Some women love shoes, some purses, but my favorite accessory is a travel trailer! The NEST has glorious upholstery – the nicest of any Airstream I’ve seen. And when it’s robin’s egg blue with buttons, gasp! It had the same build quality that other Airstreams have. It also smelled like “new Airstream” – one of my favorite scents. 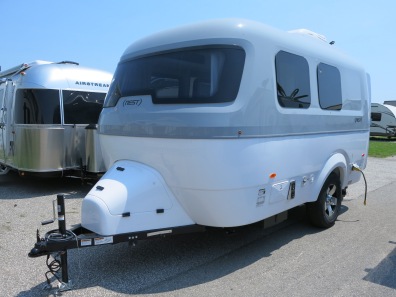 Airstream Wonderland had plenty of Airstream parts and goodies, so I spent a lot of time wandering around and touching things and doing some mental shopping.

The rest of the time, we spent in the lounge area. It was well equipped and well used. Can-Am is so busy! There are people in the lounge area waiting for service, or waiting for their walk-throughs, etc. It is pet-friendly, and they have a water bowl and treats. Humans have access to goodies too, but they don’t have to share a bowl. This is quite the operation. Our experience was so different than when we bought our first Airstream.

Just before 5:30 pm, they told us we could go see our Airstream. It was parked around the side, plugged in and connected to water. We were given a brief walk-through because Friday was our official one. Oh! It is so lovely! Then, we had to madly unload our totes from the truck and pile them outside the Airstream so that we could put the truck in the open section of the lot. The Airstream was in the blocked section, and we were going to get blocked in at 6 pm. 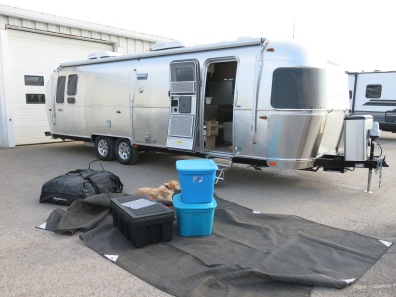 We started unpacking, but we were tired and hungry, and I was greatly disappointed in the Flying Cloud upper cabinets. I knew they’d be smaller than the International cabinets, but I wasn’t prepared for how small. We had to go eat dinner and rethink the kitchen, so we went down the road to a wonderful Italian restaurant. Afterwards, we were able to tackle the lack of kitchen storage.

I subscribe to a YouTube channel, The More We Explore, and the creators are a young full-timing couple who went from a 30ft Flying Cloud to a 23D International. We are doing the exact opposite. Anyway, when I saw them pack the kitchen of the 30 and put everything in the 23, I heard warning bells, but I also wondered if they just had less than we do. Well, we probably have more in our kitchen, but we left half of it in Wakaw. Oh my! The 23D has amazing storage, but the 30 has usable countertops and seems more functional, so it all balances.

Now, in the bedroom, there is no comparison. This bedroom rocks! There are wardrobes on either side of the bed, so it makes it cozy. Also, the curtains have black-out lining. The mattress is very comfortable, so we had such a solid sleep. I don’t even think I tossed or turned during the night. I finally got a full night’s sleep! I awoke refreshed, before my alarm, and ready for our walk-though! 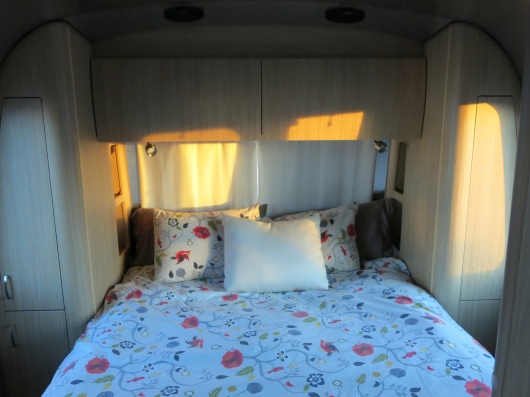 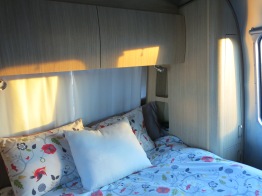 A technician came right away and asked if there were any issues that needed attention, and he got to work immediately. Then, at 9 am, someone came for our truck to reinforce the hitch, and we cleared out of the Airstream so that the equalization system could be installed. We went to the lounge and had coffee and waited for our walk-through, etc. It was all very civilized and organized. Marshall came to get us to give us our walkthrough. He was incredibly thorough and knowledgeable, since he had been a tech at one time.

We explained to him that we’d like to remove our microwave to gain more storage and showed him pictures of our friends’ (Tracey and Derek’s) trailer: 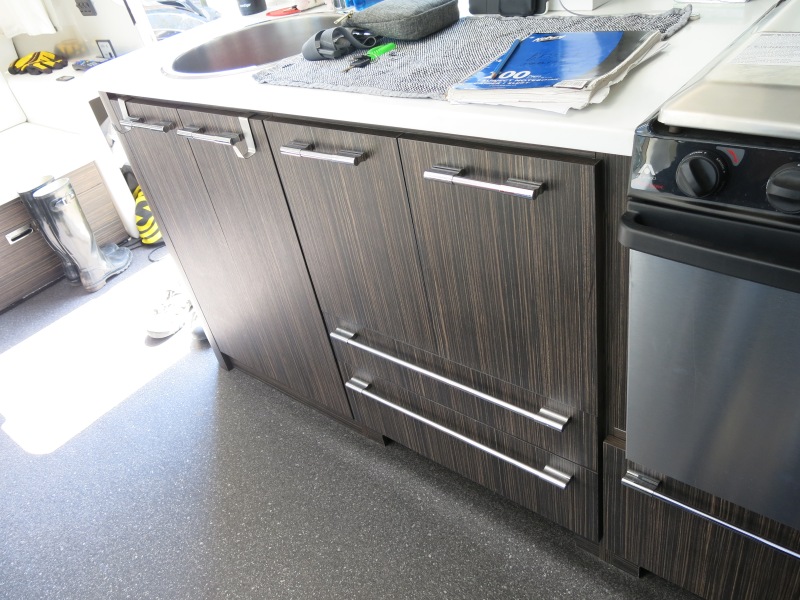 We asked how we would go about ordering the doors to create a cabinet from Airstream. He said that they do this all the time – in house! They have their own carpenters and they can rebuild an entire interior or tweak an existing one. He set us up with one of the service advisors, and we are getting quotes for different configurations.

On the second night, Daisy decide to do a little investigating.  She was so adorable, peeking into the new spaces.

We will leave on Saturday and start heading to Ohio because we’re going to ALUMAPALOOZA!