Even Flying Clouds have Silver Linings

I’ve been delaying writing this post for quite some time – 2 months, in fact. We were eager to return to Saskatchewan to see our friends, but we were sad about what we knew we had to do: hand our Airstream over to our insurance provider (SGI). Today, we finished packing up the Airstream because tomorrow, we say good-bye.

Last June, our Airstream had an unfortunate encounter with hail. Although the hailstones were small and the dents miniscule, the Airstream was a “total write-off,” according to our adjuster.  It wasn’t logical because our friends’ Airstream (barely two blocks away!) was also hit, but not written off. However, we had different adjusters. We would have purchased ours back, but the buy-back value was too high. They would not negotiate to lower the buy-back value, and we didn’t want to go through the arbitration process to negotiate raising the current vehicle valuation. This is because there aren’t any comparatives in Canada and SGI refused to consider US Airstreams as comparatives. What a headache! It almost seems like someone at the insurance company intends to buy it, so that’s why they were making it difficult. We will see if it ever makes it to the auction block.

Over the winter, we searched for a gently used Airstream in the US. We saw a 2017 model in Las Vegas that looked older than ours. It had been used and abused in its short life. We didn’t find anything suitable.

At Can-Am in London, ON, we had seen a new 2017 Flying Cloud on their website last August. However, when we were finally in Ontario to see it, we learned that it had recently been sold. Then, it reappeared on their website later that fall. The buyers weren’t able to get financing. I kept an eye on it while we searched in the US. In February, we decided to call Can-Am to ask about it again. We were informed once again that it had just sold a few days earlier. What timing! However, a week or so later, we got an email stating that the buyers could not get financing and it was available again. That was back in March. You might remember the day we had to drive up a hill while out on the desert to get cell coverage for an important phone call. That was the phone call. We sent our deposit on a new (but year old) 2017 30’ Flying Cloud.

Although I prefer the interior of our International, the Flying Cloud line underwent an update in 2017, and I do appreciate the new décor. Our upholstery is Dwell Ultraleather in Sandpiper, which is off-white, and the cabinetry is Wilsonart’s Landmark, which is a straight-grain laminate resembling teak and framire (an African oak). I think the overall décor is close enough to Danish modern to make me happy. I’ll miss our large white backlit overhead lockers and the higher end hardware, lighting, and faucets, but all Airstreams are exquisite! I’m on Flying Cloud 9! 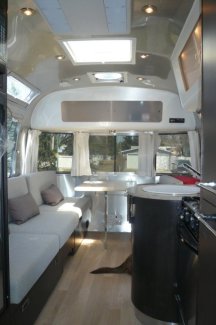 It will be really nice to have a queen bed after 48″ of Extreme Cuddling (Poppy’s favourite sport).

This winter, when people asked us why we chose our first Airstream and why we were searching for another one, we had a hard time explaining it. All RVs offer people the same amenities, but in different sizes, so why would you choose something so much smaller but more expensive?  People who choose Airstreams seem to have an emotional attachment to them; it isn’t necessarily a rational decision. Airstreams are expensive, easily damaged by hail and gravel, relatively small, not warm in winter, etc. However, when we returned to SK to our Airstream, we both were giddy. Oh, how we missed it! When we opened the door, I had butterflies. The feeling was not unlike love.  How do you describe love? What RV gives its owner butterflies? What other RVs have silver linings?

We pick up our Flying Cloud on May 25 in Ontario, so after our Airstream club (WBCCI) meet this coming weekend, we will hit the road again.

We will miss our little escape pod.  New adventures await in our shiny new Atomic Pod!

4 thoughts on “Even Flying Clouds have Silver Linings”