I have been following Bob Wells’ website “Cheap RV Living” for a few years, so I had been planning to attend the RTR some day.  He started the RTR back in 2010.  There were only 45 rigs at that first event.  It has grown exponentially.  This year, there were over 4500 rigs!  It is almost unfathomable to think that so many people have decided to ditch the usual path of life and live full-time on the road.  Because of the vast number of people, we didn’t get to meet too many personally, but we had a few chats.  One couple was down our loop.  They are work-campers at Glacier National Park in the summer and travel the rest of the year.  They also have a little old lady dog in tow.

Here’s Bob at our orientation.

A glimpse of some of the attendees at the orientation.

There were many sessions to attend.  One of our favourites was a camping gadget show-and-tell.  Paul also attended a solar cooking methods session.  Many of these sessions were recorded and will be on YouTube on Bob Wells’ channel.  Because the event was so spread out, we didn’t attend nearly as many sessions as we would have liked.  The Bureau of Land Management kept track of our numbers, and took Bob out to see some larger sections of desert for us.  He was pleased to announce that next year, we will be in a new area without so many washes to walk through.  Yay!

There were about 5 Chinooks in attendance, but we had the only 24 footer.  The rest were 21 footers.

Here we are alone for about 1 night.  Then, it filled up. 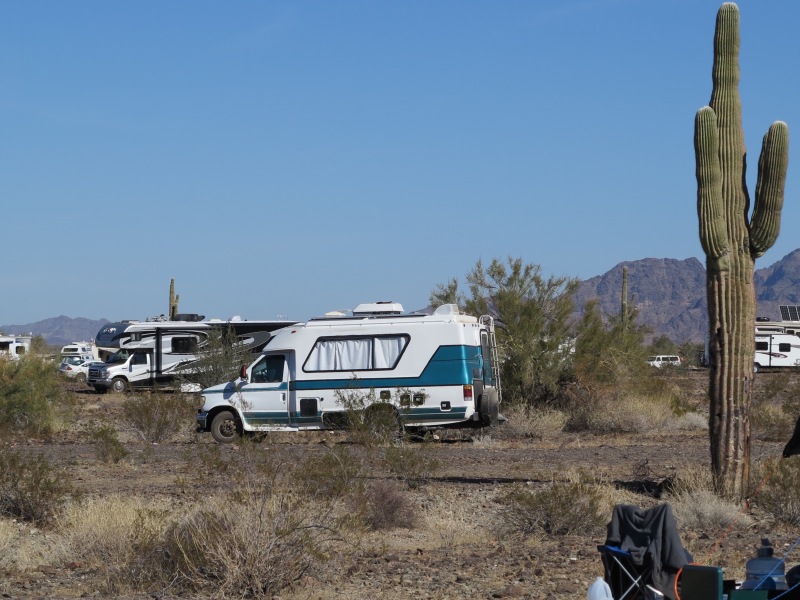 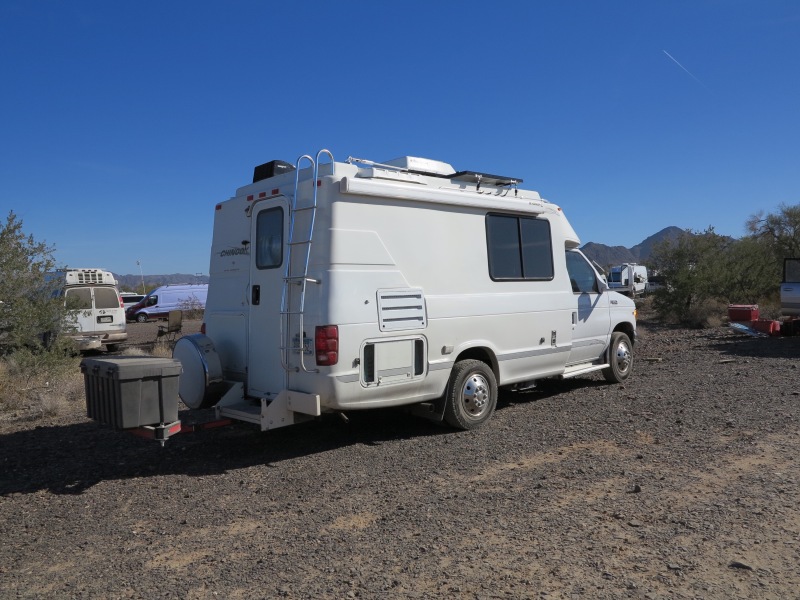 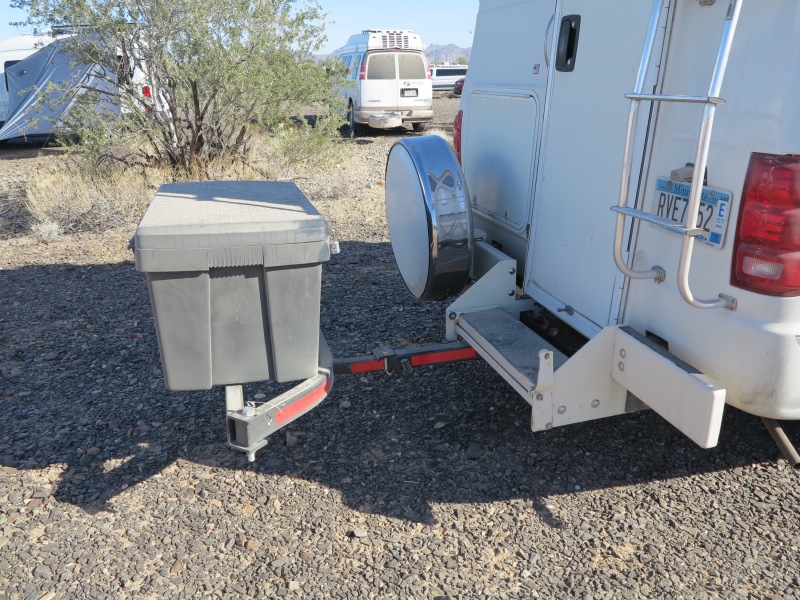 Of course, there were some Airstreams: 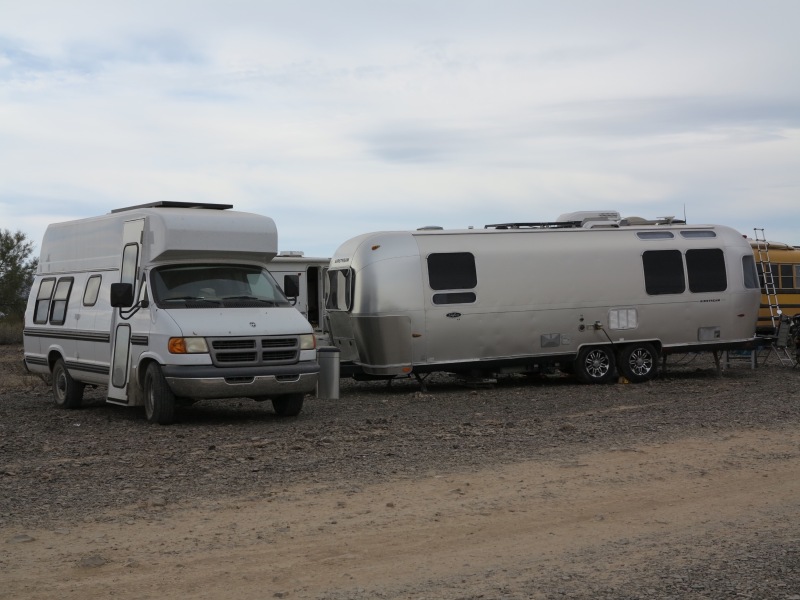 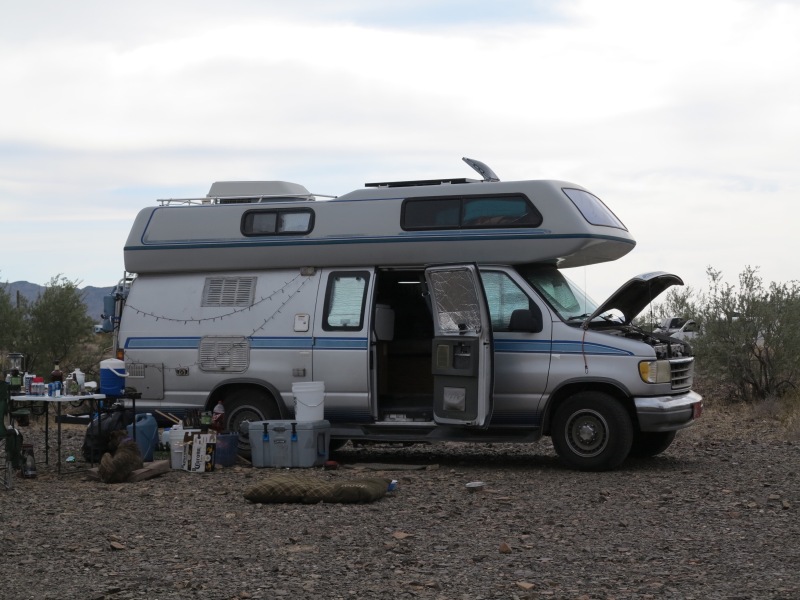 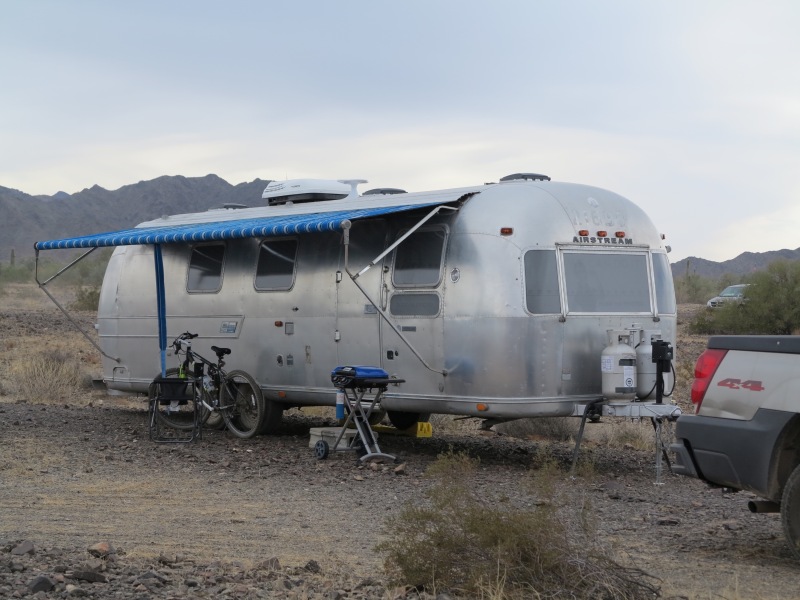 There were too many Airstreams to photograph.

And some other cool rigs: 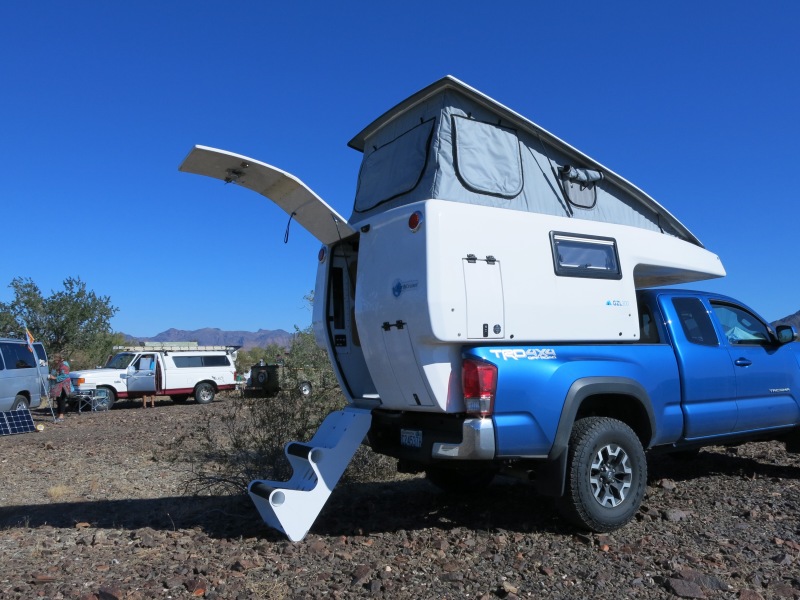 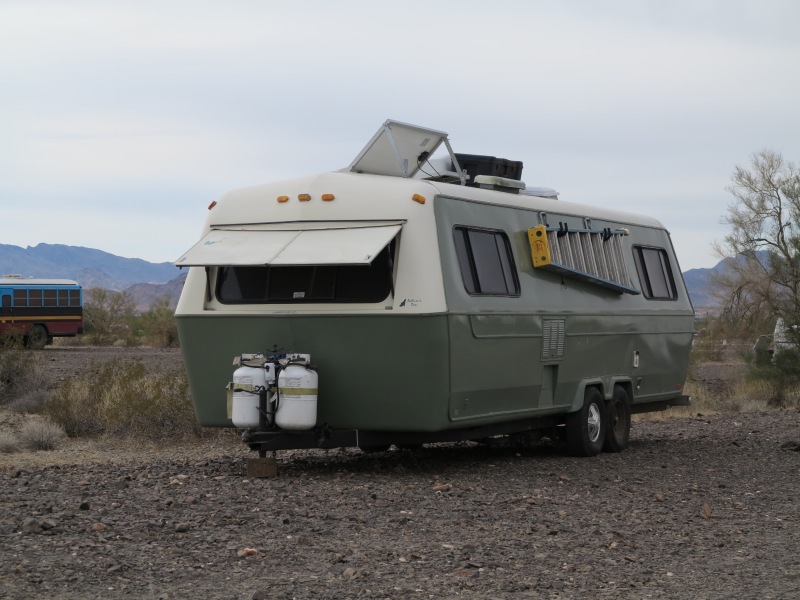 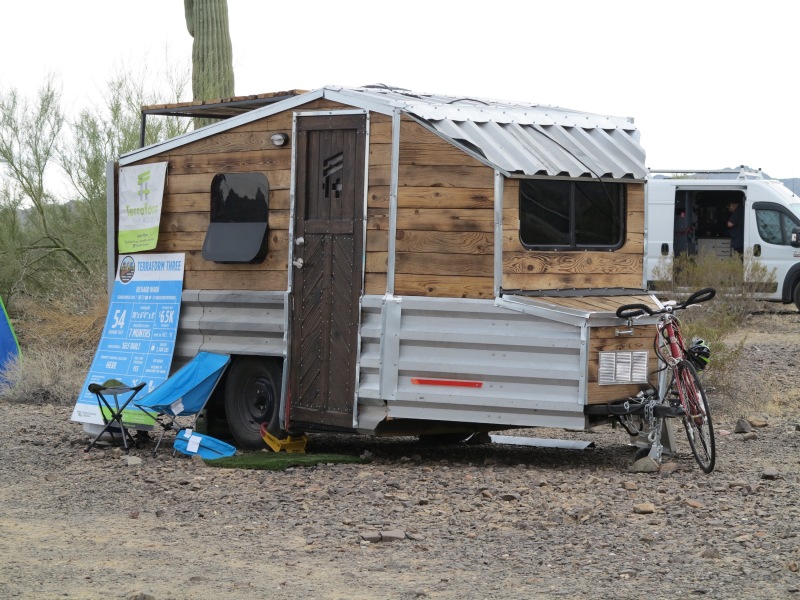 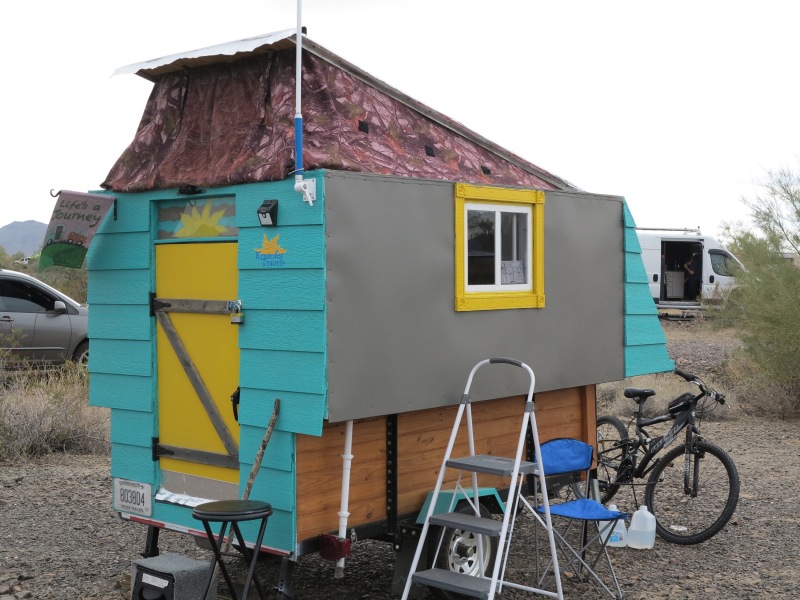 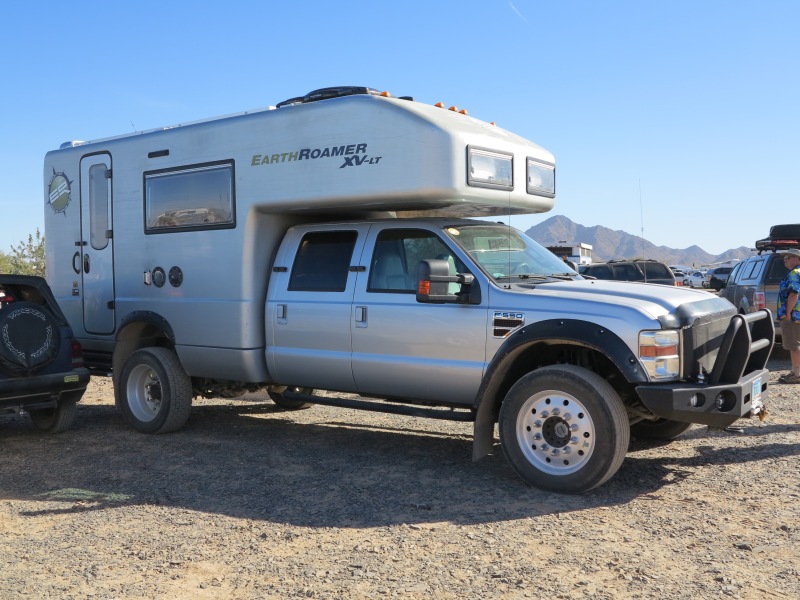 The fourth one in is Seven’s from the YouTube channel “Seven Wanders the World.”  He started his tea house and book exchange at the RTR, so we had a nice visit with him in his van and he made us tea. 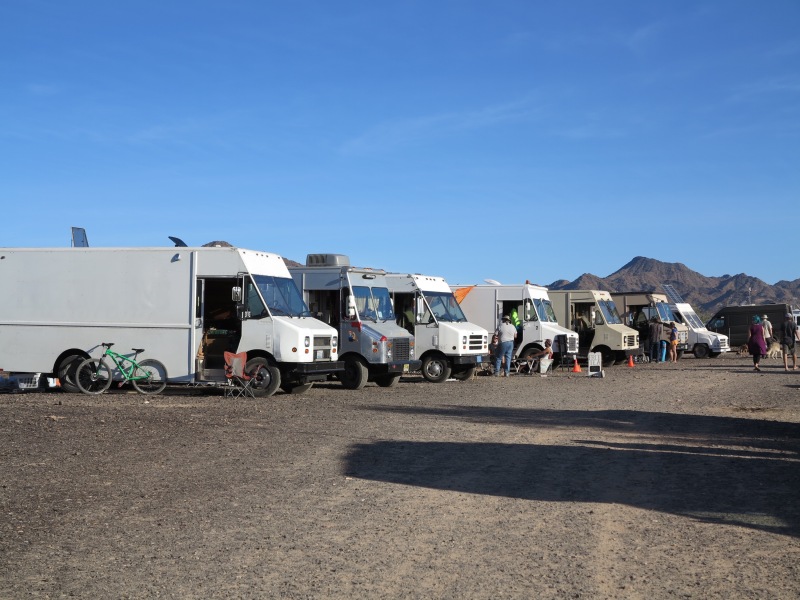 Joni has a new YouTube channel called The Galavan, and we got a tour of her rig: 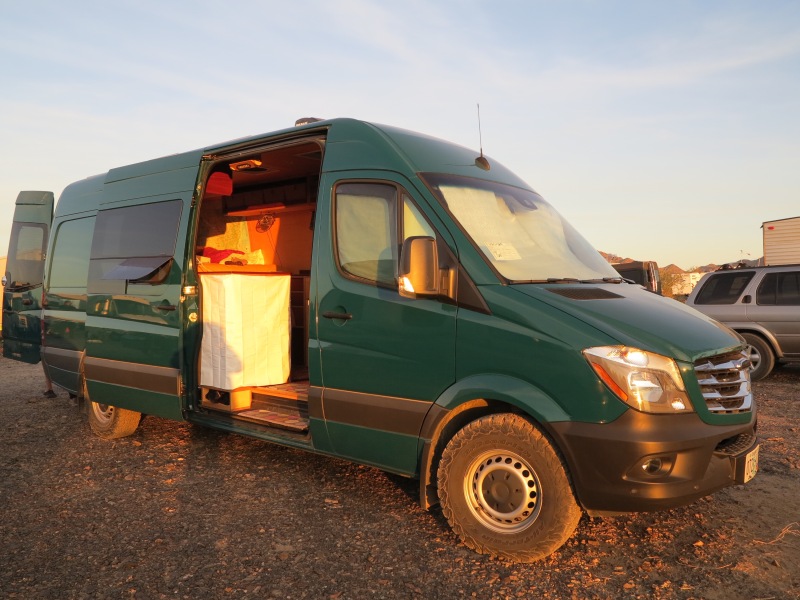 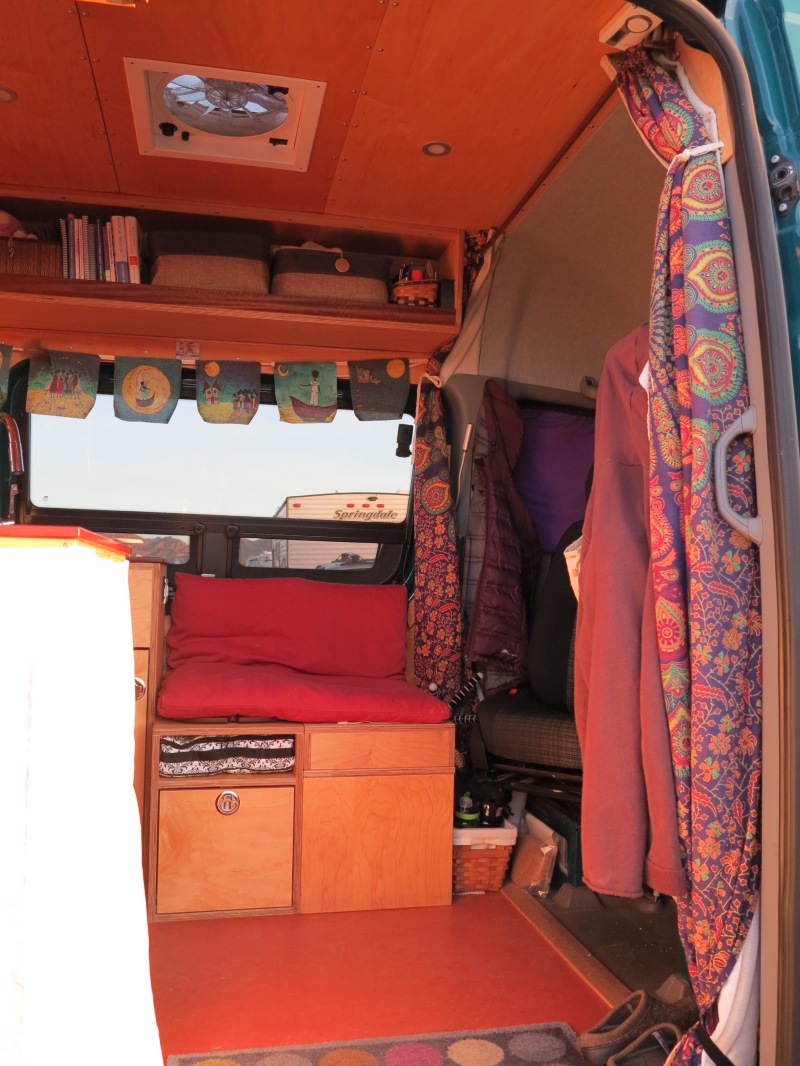 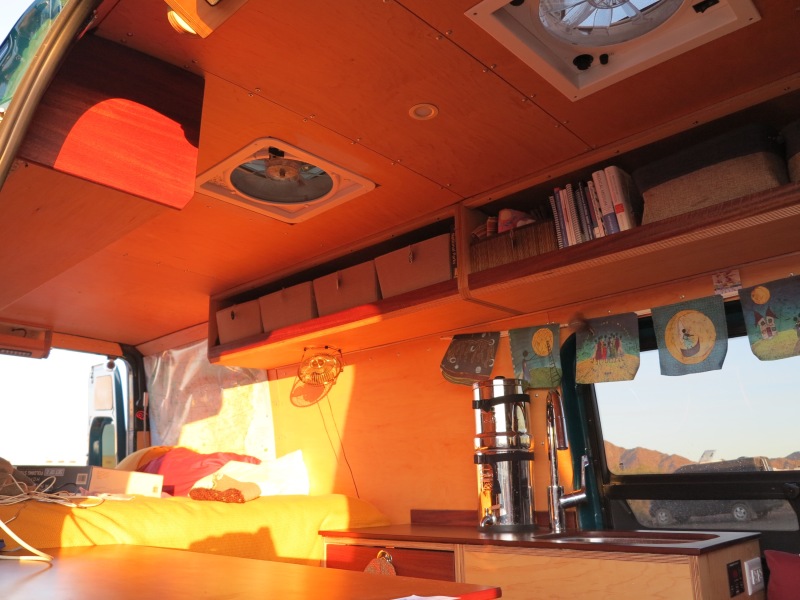 We met other YouTubers: Carolyn (Carolyn’s RV Life), Kevin & the woof pack (Campervan Kevin), and Brian (Adventure Van Man).  We also saw others, but didn’t chat with them like Eric (Nomadic Fanatic) and Elsa (Elsa Rhae).  Carolyn interviewed us briefly, so we may be in one of her videos.

My dad and I have often discussed how a bubble van would be a perfect camper, and someone brought one: 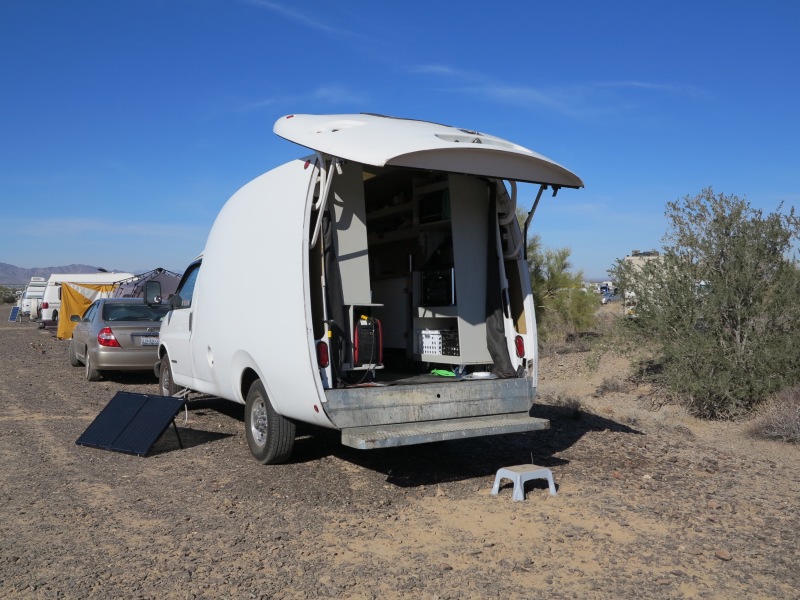 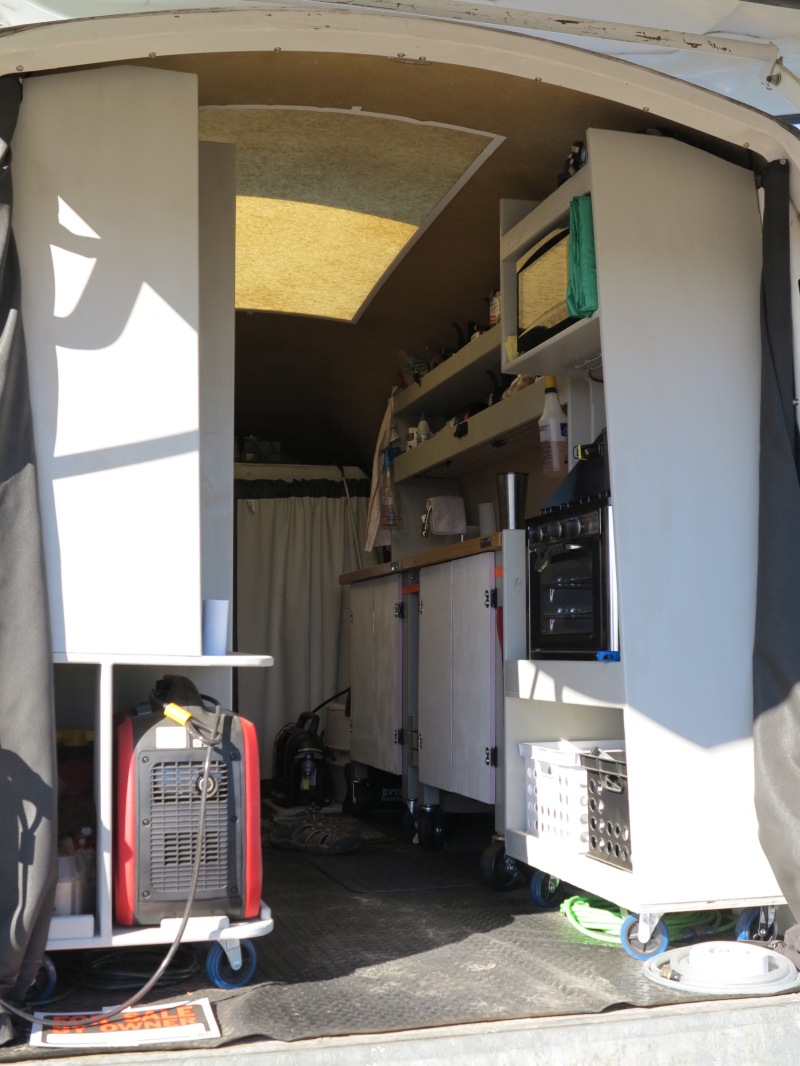 It’s a Unicell fibreglass shell on a cutaway chassis.  I love the way the ceiling has an unfinished section so that sunshine can brighten the space.  They are made in Canada and the US.  The owner was shocked that I knew what it was.  Apparently, I was the only person who came by who knew.  I don’t know much, but when it comes to camping . . .

One of our neighbours had a 16-foot Casita and a passenger van that he converted to a campervan.  He did such a fantastic job.  It is like a sailboat inside.  He said he built out the van after his wife passed away because he needed a project.  He spoke so fondly of his wife and how she loved camping.  We enjoyed an evening campfire with him.  Here is Kevin and Blaze and the campervan: 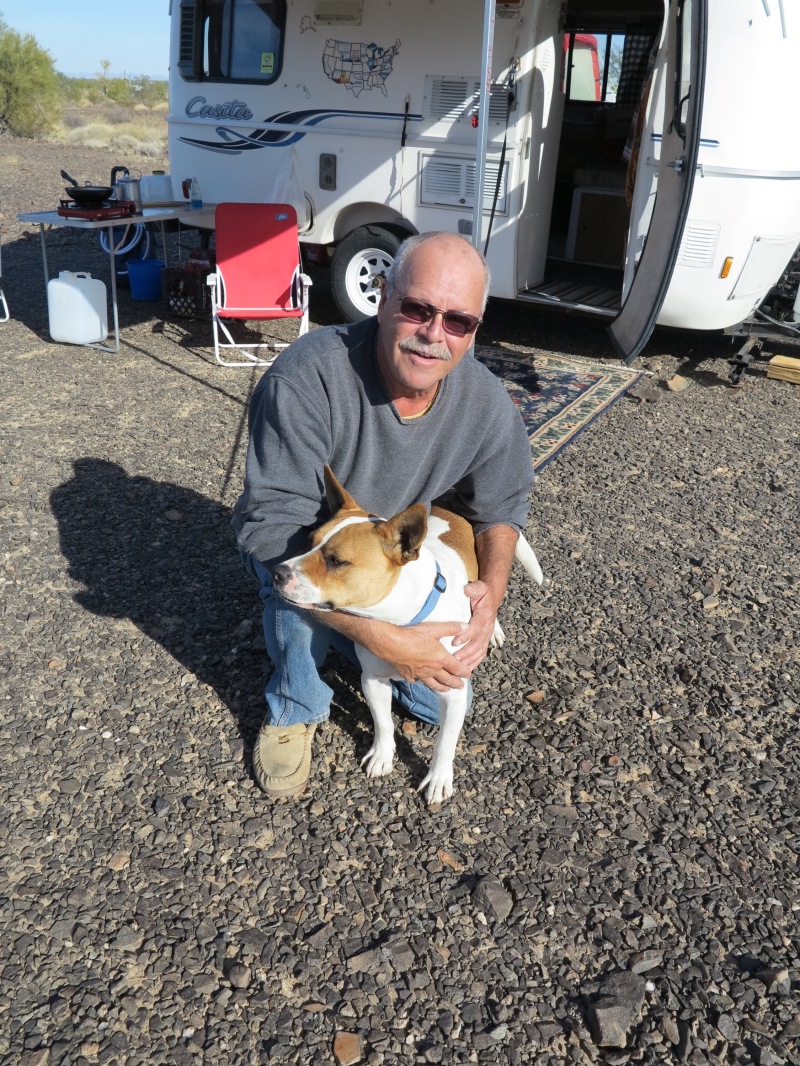 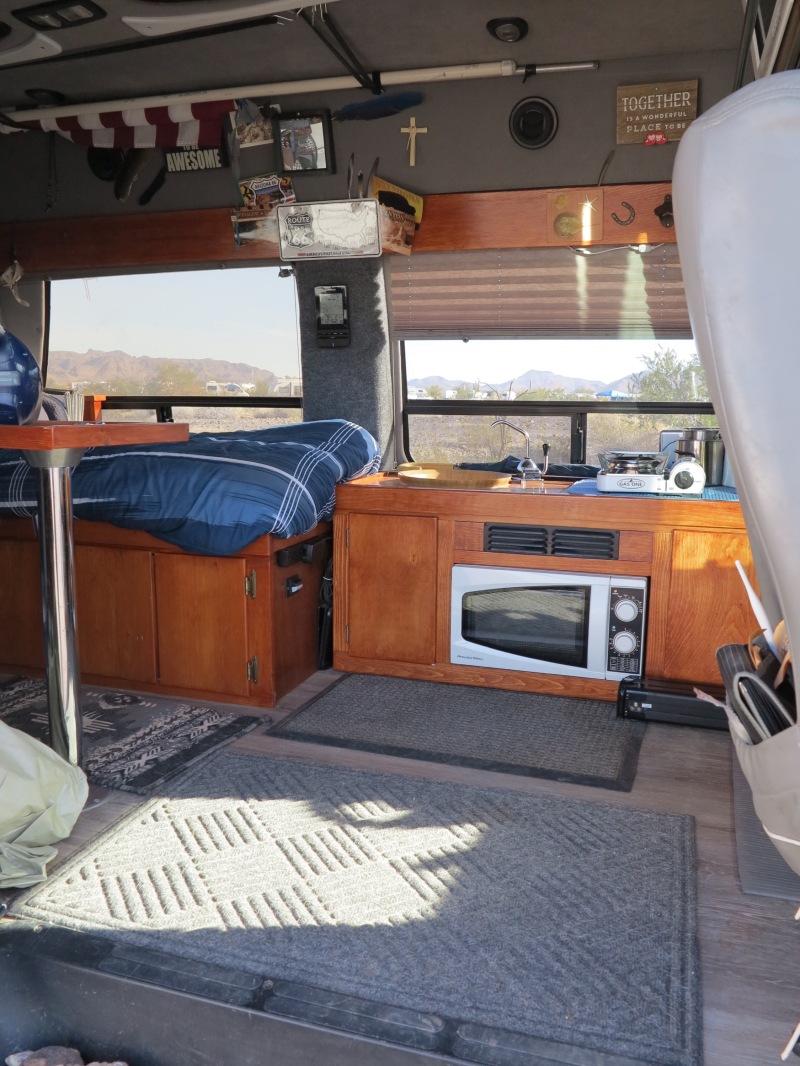 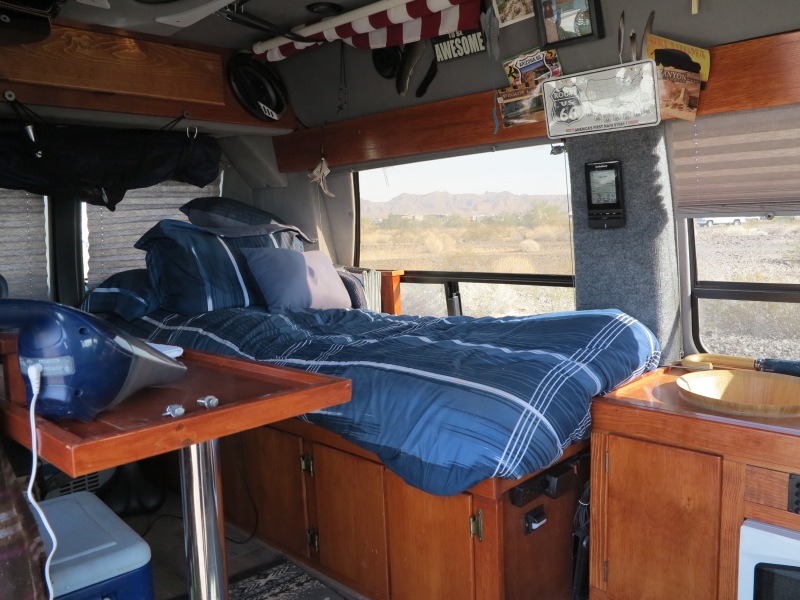 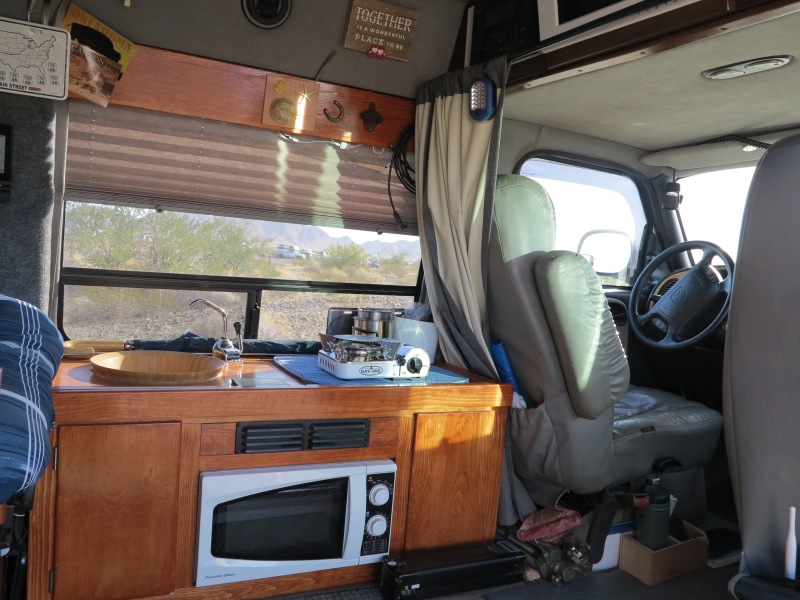 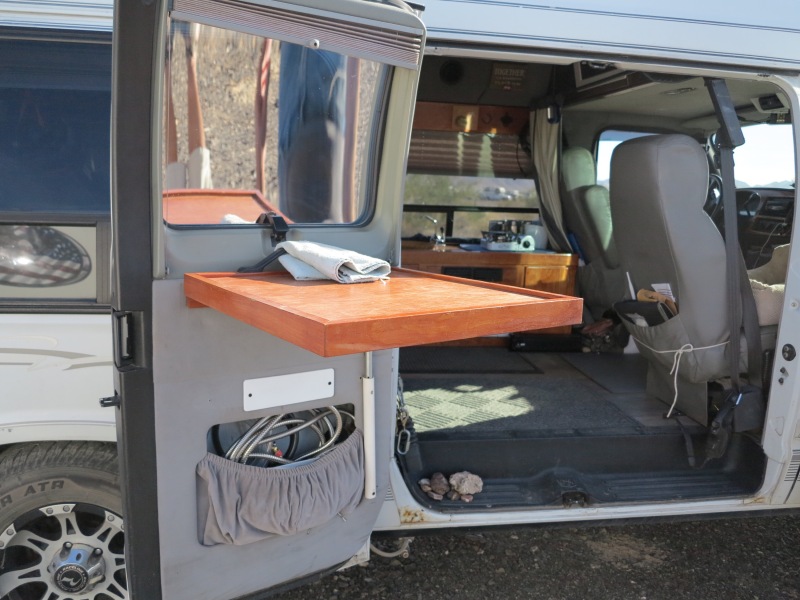 Our good friends, Ted and Dona from Saskatoon, made it to the RTR for a couple of days.  We were so happy to see them, but Poppy was happiest!  She loves them.  Ted and Dona let us driveway-camp and provided us with hot showers, electricity, and meals in Saskatoon.  Also, Poppy loved stretching out in their house, so when they arrived, you can imagine her excitement. 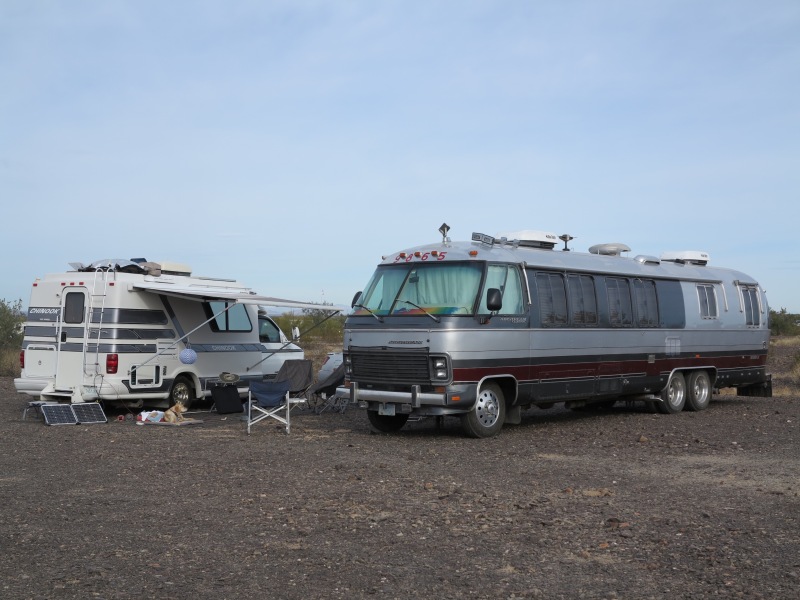 The RTR ends tomorrow (Sunday January 21), but we left on Thursday to join our Airstream club for a camp out.  Stay tuned for more fun in Quartzite.