We had only planned to spend one night in Zagreb before our flight left.  We really had wanted to spend more time on the coast, but our plans changed with the weather and due to our limited time.

On Sunday morning, the clouds lifted and we enjoyed a last walk along Lake Bled.

You can really see how far we had to walk up to that castle. 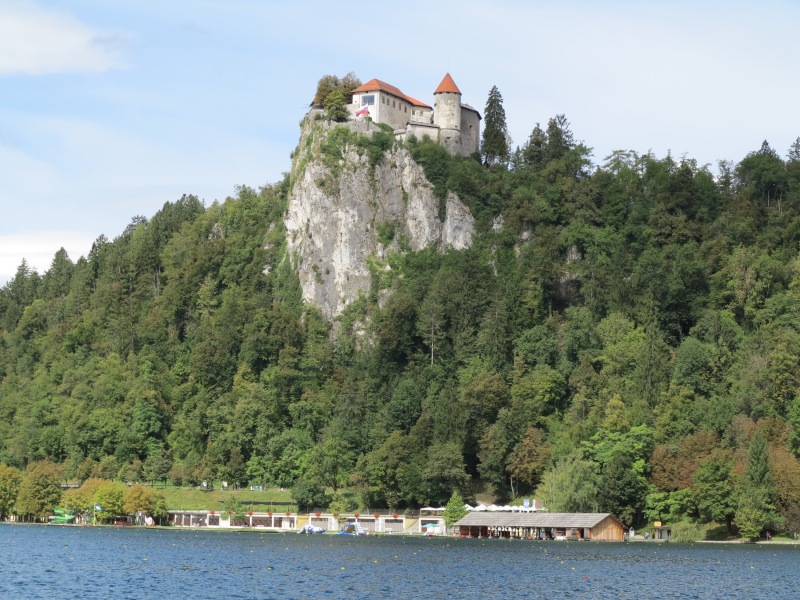 Since it had dried up, the luge was up and running again.  Too bad we didn’t have enough time to try it.  We had a blast in Austria on the luge.

We boarded a train from Lesce-Bled to Zagreb.  The journey was about 3.5 hours.  We met a woman travelling from Lesce-Bled to Ljubljana.  She was a local, and very friendly.  Then, she showed me pictures of her dogs.  We became instant friends!  She has a Malamute that is in agility and a black poodle that just likes to have fun.  She apologized for her “bad English.”  She probably speaks 7 languages and communicated just fine with us.  We are the ones who should apologize.

The train cabins hold 6 people.  As we progressed down the line, our cabin filled up to 5.  We chatted with a young British couple who was travelling for 2 months using a Euro-rail pass, and a Croat man.  The poor British girl had bed bug bites all up and down her arms and legs.  I wonder if she know what caused those bites.  They were staying in hostels.  Bed bugs bite in a line.  If you see a line of bites, uh-oh!  Inspect your bed BEFORE you put your stuff on in.  I hope she didn’t have any travellers in her bag because it was touching my bag.

Travelling by train is far more civilized than by plane.  You buy your ticket and hop on.  There are no line-ups and security hoops to jump through.  After you are seated and the train is moving, a conductor comes by to validate your ticket.  Done.  At the Croatian border, we had to get our passports stamped again.  Since we had just been here a few days ago, they examined our stamps more closely.  Since Croatia has such a long coastline, border patrol still needs to stamp passports.  Lots of people try to sneak in.  Of course, this whole procedure was done from the comfort of our seats.  Civilized.

We arrived in Zagreb at 5:10 pm.  Just in time for dinner!  When we arrived, our first thought was that it was “gritty.”  The buildings are covered with graffiti like Athens, but once you get past that, this city was made for relaxing!  They have mastered the art of cafes and people-watching.

Our first B & B was in the heart of the city, yet it was quiet because it faced a courtyard.  Our host gave us a map and tips for restaurants, bakeries, sights, etc.  We both really wanted cevapcici, so she recommended her favourite restaurant for that dish.  We ended up going there twice!  Where will we find that in Canada?

This was right across from the train station.  I guess it was a sign! 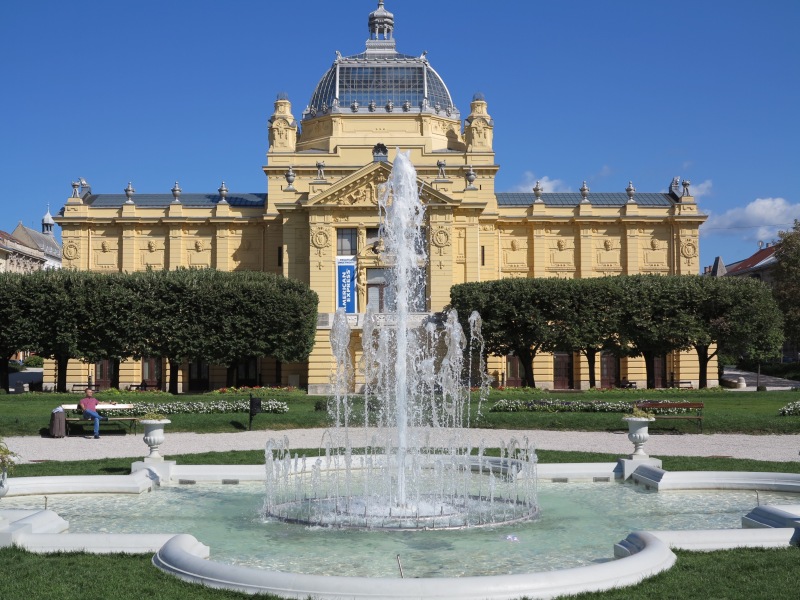 People-watching at its finest

On our second day, we followed a suggested walking route from the Rick Steves guidebook.  It was so enjoyable!

This was the start of the route — Jelacic Square, where everyone gathers to meet.

They claim this is the world’s shortest funicular.  It only took 53 seconds to reach the top.  The cost was 4 kn, but the men didn’t take our money.  They said “at the top,” but they didn’t take it at the top either, so it literally was a free ride.

At the top of the funicular, you enter the old town of Gradec.  This is the original watchtower.  In the top right window, you can see a small canon.  It goes off every day at noon.  It’s loud!

St. Mark’s.  We didn’t go in, but the roof tiles are spectacular. 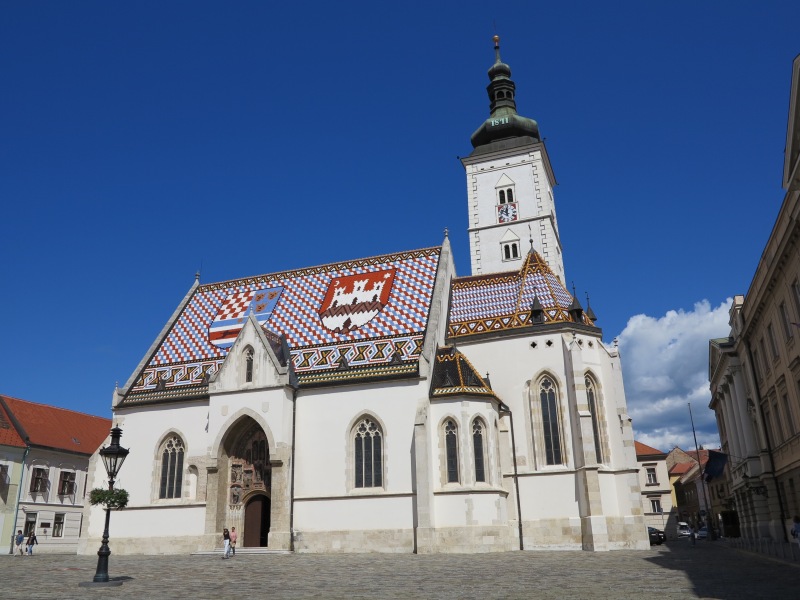 Across the square from St. Mark’s we found an old disused building that was crumbling.  We couldn’t find any information on it.  The inside and outside had supports to prevent it from falling down.  I think it’s beyond repair.  The supports are probably to prevent it from busting through the neighbouring buildings.  Of course, I had to inspect a little more, so we went around the back for more pictures.  We think it was originally a bank. 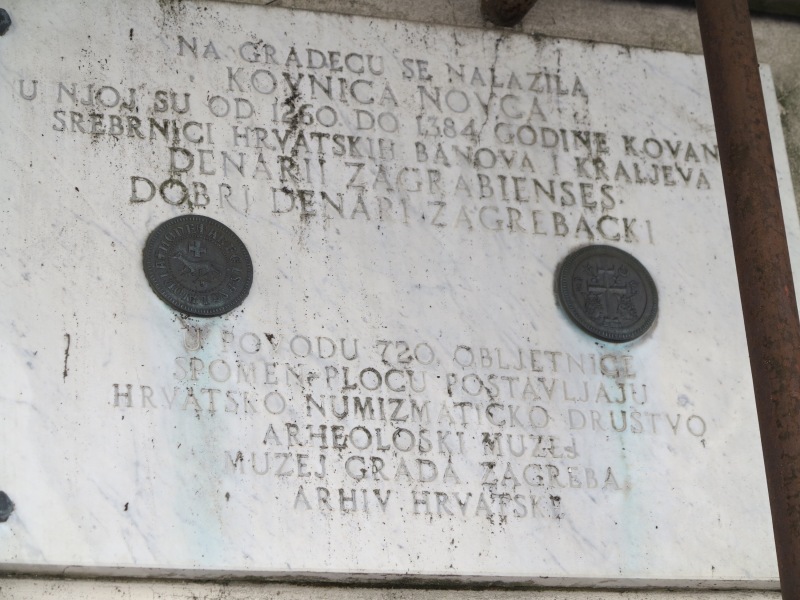 Look at how plants are growing inside and outside the windows: 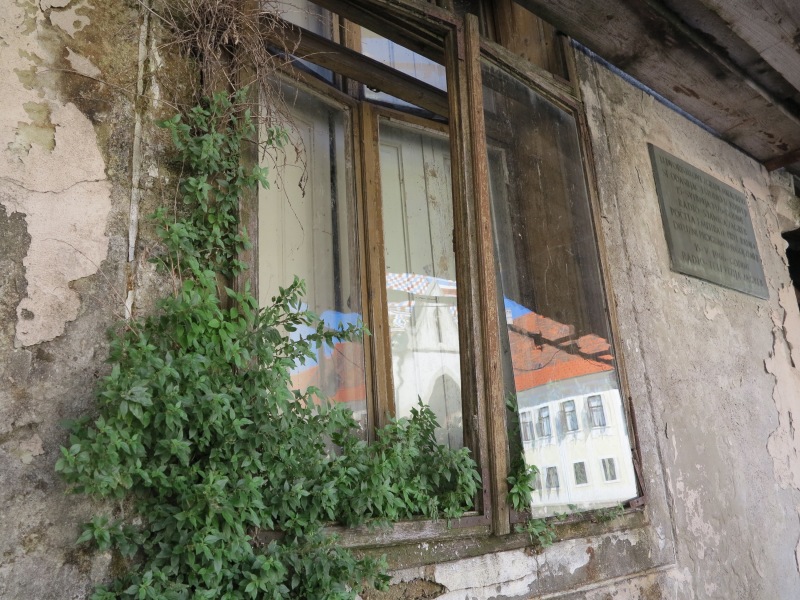 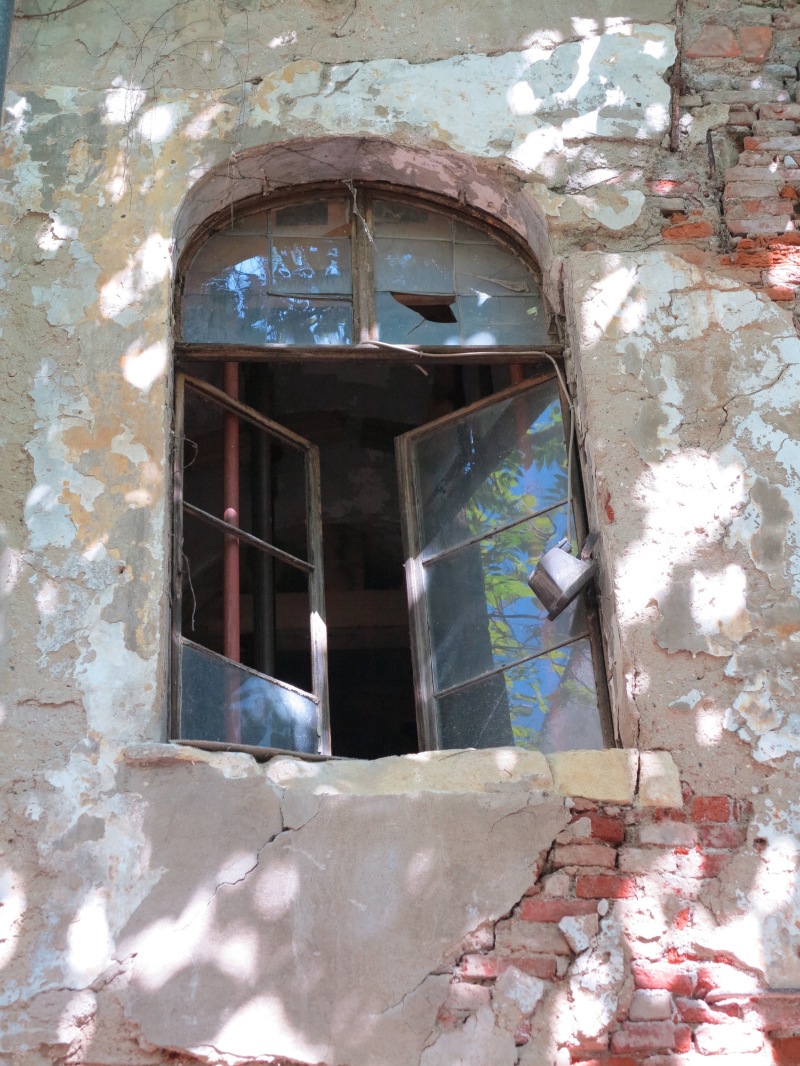 Then, we crossed through the stone gate.  It’s the only original gate from medieval times.  Inside is a chapel of sorts.

There was a long row of them, and they were pretty cute.  What most people don’t realize when they see them is that these were houses of ill-repute long long ago.  Yes, this was the red-light district!  Now it backs the most popular street in Zagreb, Tkalciceva!

Tkalciceva street has such an abundance of cafes and restaurants, as well as smart shops.  We were still on the hunt for traditional Croatia dishes, so we went to La Struk for strukli, a traditional ravioli dish.

We sat in their back garden.  In Canada, the building would have been condemned, but it was charming. 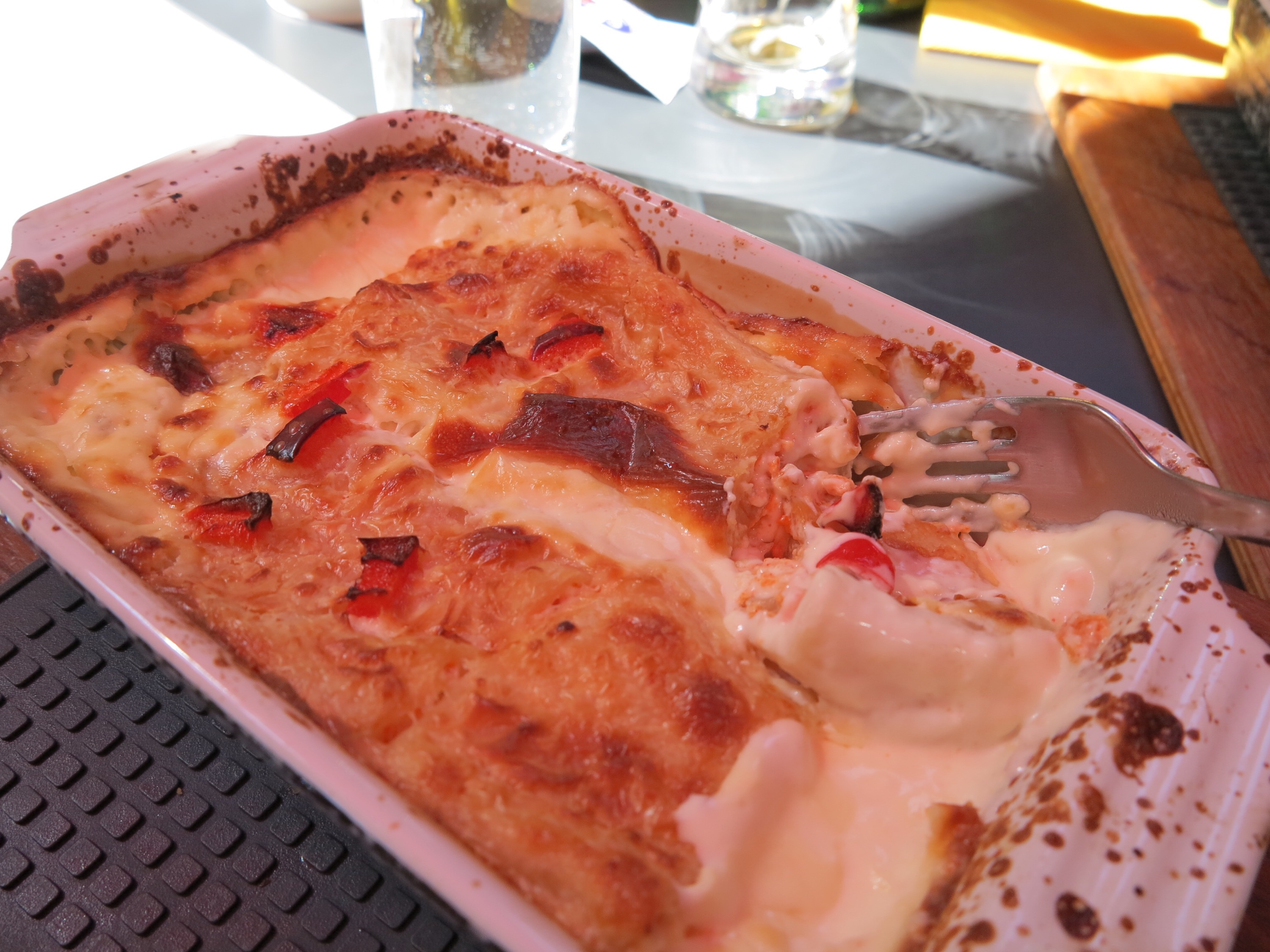 All of the back balconies in the old red light district face the cathedral.

Original medieval walls around the cathedral: 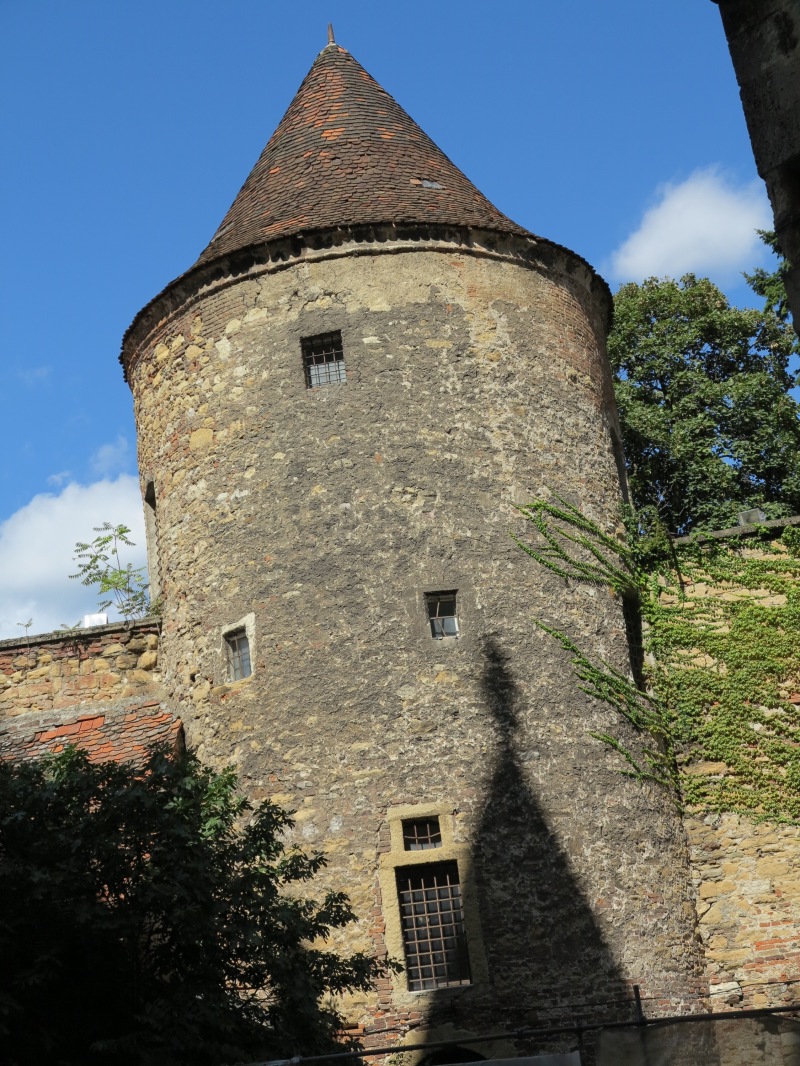 An earthquake in 1880 caused this clock to stop

The spires have taken a beating, so they are being replace.  Here you can see old and new side-by-side.

In front of the cathedral is a fountain.  This spaniel was frolicking in it, chasing pigeons!  What a blast she was having.

I found some interesting Art Nouveau buildings here too. The sun wasn’t in my favour when I photographed this beauty.  The balcony floors were a translucent blue.  The walls were lovely tiles with different motifs on each storey. 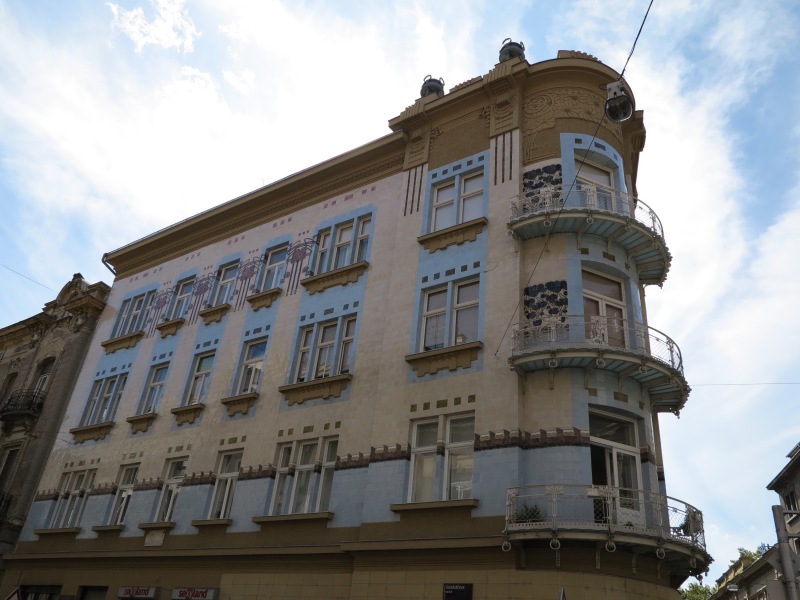 This one wasn’t tiled, but the motifs are attractive.

Now this is a farmers market!  The prices were incredibly affordable!

We bought 2 nectarines from this vendor, and I think we paid 1 kn (20 cents).  They were so sweet and fresh!

Tomorrow (Wednesday, September 6), we fly back to Toronto.  We have had an amazing adventure, but we are really looking forward to seeing the girls.  We left them in the best hands possible — my parents’ — which is a good thing because Daisy has had several seizures.   This has been a great responsibility for my parents, and it’s time to take the pressure away from them.  Thanks mom and dad for keeping the girls safe and loved. 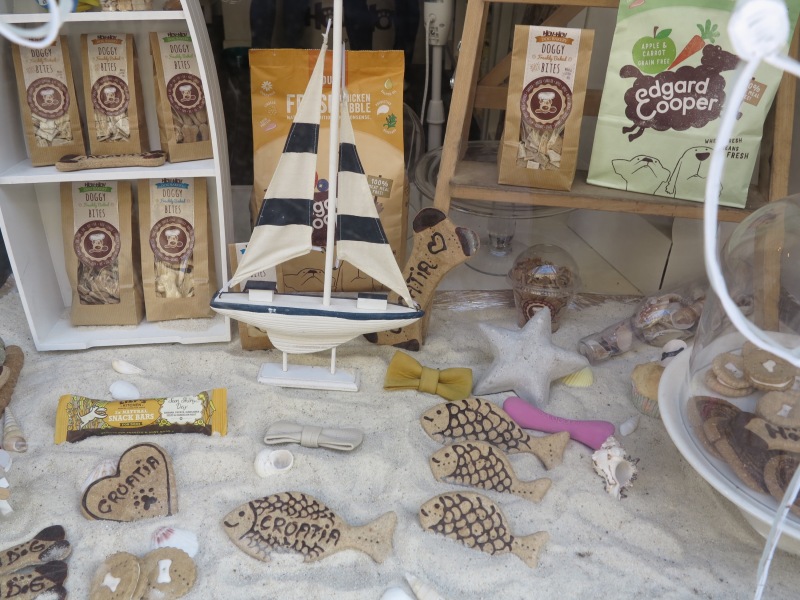 Daisy and Poppy yesterday at my parents’ backyard campground 🙂