The drive from southern Poland, through Slovakia, to Hungary was scenic.  It was quite hilly.  We got to see gypsy children running through fields and camps near the roadways.  The houses definitely changed as we got into Hungary.  Most houses had little yards with fences around them.  Interestingly, we had be talking among ourselves about how we hadn’t seen any fences . . . And then we hit Hungary.  The houses were often single-storey and surprisingly looked similar to my maternal grandparents’ house (they were Hungarian).  The gardens had lots of flowers and vegetables behind the fences.  Unfortunately, this was difficult to photograph from a bus. 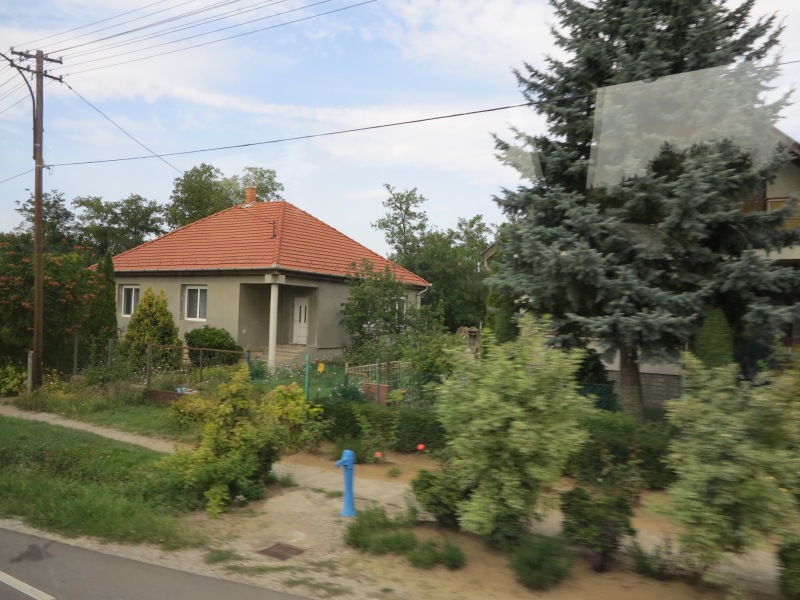 Our first meal in Hungary was spectacular!  It was like being at my grandma’s!  We had veal paprikas and galouska, with a side of cabbage rolls and hot pickled peppers!  Anyone who knows me, knows how much I love galouska.  I ate it every day while I was in Hungary.  It is similar to German spätzle but much more satisfying.  For dessert, we had palancinta, which are like crepes (I also added another side of hot peppers).  All my favourites! 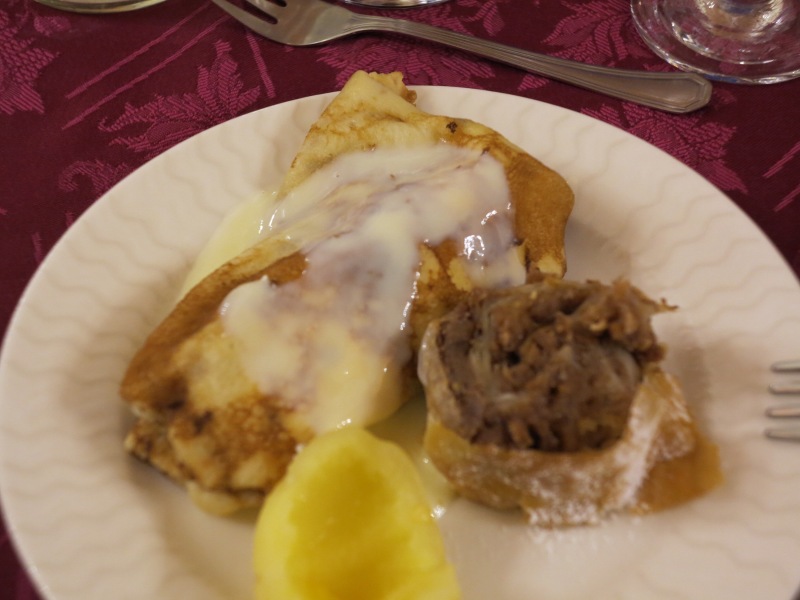 See the hot peppers on both my dinner and dessert plates?

The next day we went to the local market.  We are visiting at the perfect time of year for markets.  Peppers upon peppers in Hungary.

In Canada, these tomatoes would be called “heirloom” tomatoes, but they have so many original varieties here that they are all heirloom. 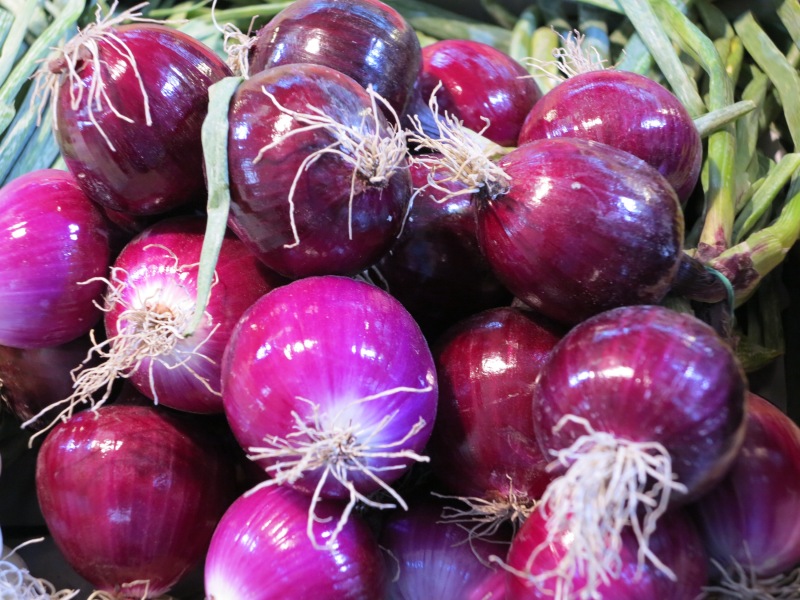 One special visit we made was to a local school.  Perhaps that seems like a strange place to visit, but we all can relate to being a student, so this was a very unique  visit.  We met a teacher who is retiring in November.  She taught some summer classes over the years, so that is why she won’t be teaching the full school year.  She talked about teaching under the communist system and now.  She also talked about Hungarian kids today and the challenges teachers face.  Our problems in Canada are similar.  They wish they could get the gypsy children to attend pre-kindergarten to help them get a better basis, but they cannot convince the parents.  They struggle a lot with trying to get the gypsies to succeed.

We met her in the school’s language lab, which was of particular interest to me.  They no longer use the antiquated lab.  Instead they have a computer and Smart Board for lessons. 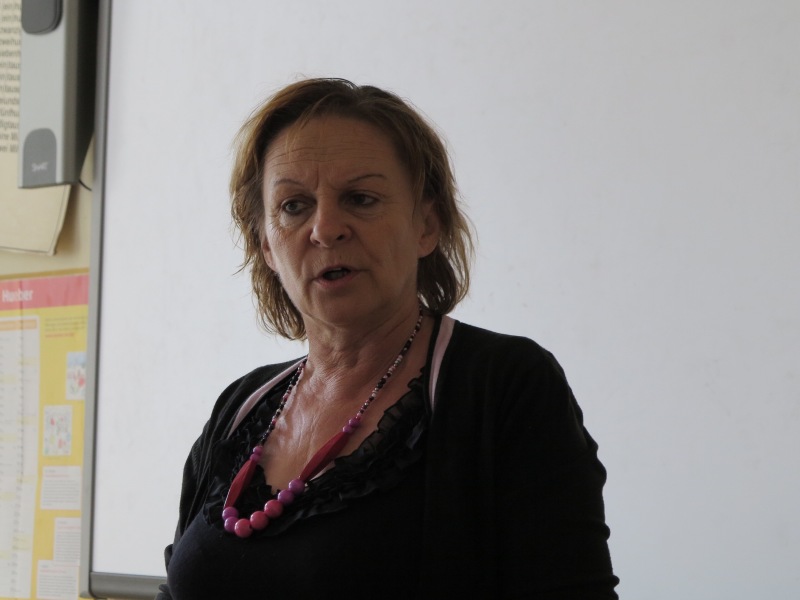 She explained that in Hungary, all children are served lunch.  The kids want food like pizza and burgers, but they refuse to serve that.  Instead they feed them traditional meals.  Then, we went to the cafeteria to eat a typical meal.  It was wonderful!

Round noodles, paprikas, and pickles.

Later, we drove through wine country, where the famous Bull’s Blood wine is made.  We stopped at a winery for a tasting, but it was unlike any wine-tasting I’ve been too.  We started with a shot of grappa, and then we all went to the patio for snacks to eat in between the wines.  The exciting part is that we had a live violinist play for us during the tastings!  He played traditional songs and other songs too.  It reminded me of being at a Hungarian wedding!  We have recordings of my grandfather playing these songs.

This little boy must have been a relative.  He was hiding in the bushes playing the “violin” on his arm.  Adorable!

We also went into the cellars.

Back toward the main road, we saw what our yard would look like, Hungarian style: 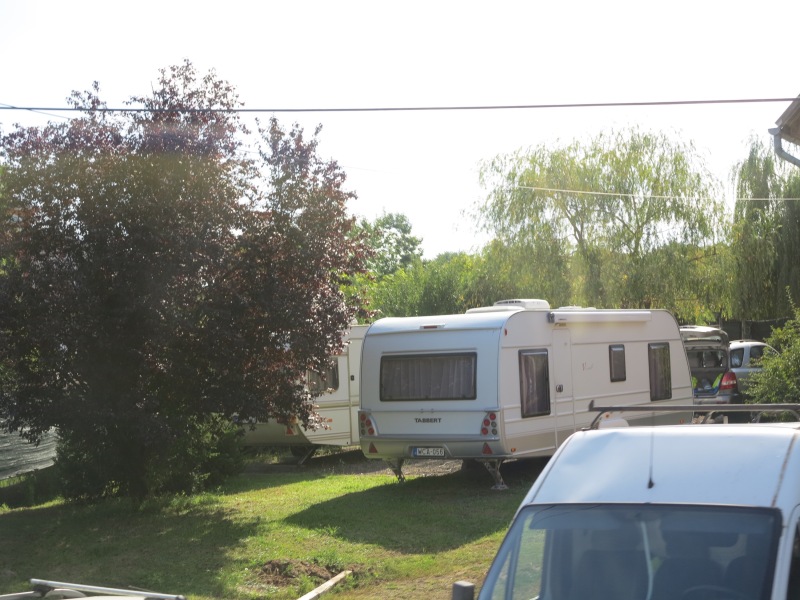 2 caravans in the yard!

One thought on “Eger, Hungary”