Where do I begin?  What can I say?  Visiting these two places in one day was highly emotional.  I doubt anyone can see these sites without bile rising in the throat or tears filling the eyes.  These are memorials of human atrocities.

I had no idea of the size of Birkenau.  It is approximately 10 times larger than Auschwitz.  Most of it was destroyed before liberation, so there are only a few buildings standing, foundations, and ruins of the crematorium.  There is a reconstructed railcar there so that you can see the actual size and then imagine how many people were crammed in it — standing room only. In each car, there were two buckets:  one with water and one for sewage.  When you see pictures of people lifting up children to those cars, you can’t help but wonder why people boarded them willingly, and also handed their children up to the arms of people in the cars.  Well, the people were told that they were just being relocated, and they were instructed to bring no more than 50 pounds of possessions with them.  They had no reason to assume they were being sent to their deaths or to work until they died. 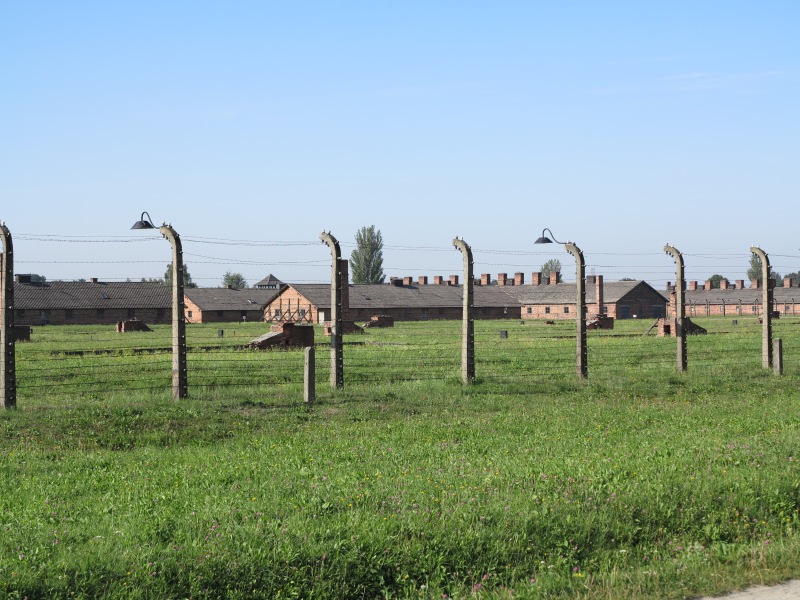 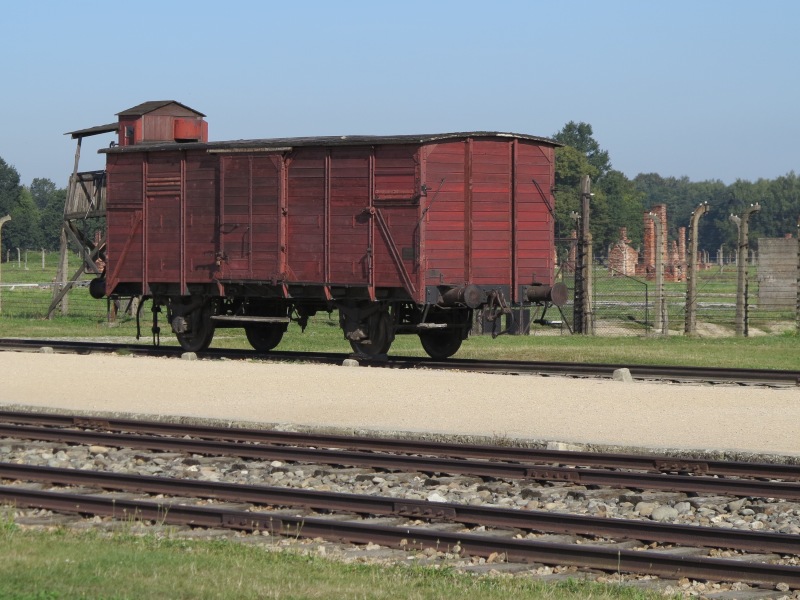 When the trains arrived, people were separated into 2 lines: those selected for work and those that went directly to the gas chambers.  The elderly, young, and sick were killed immediately.

The voltage on the fences was significantly higher than was at Auschwitz.  I’m sure that some of those who survived the selection process grabbed on to the fence to bring on death.  What horror!

When you tour this site, you will have a guide.  I think that the quality of your experience depends on the guide. However, I wouldn’t doubt that they all mostly rattle off a memorized speech, which was too bad.  The script wasn’t very heartfelt.  Nevertheless, I was so moved by the mounds of possessions and photographs on display. We moved from building block to building block.  Each block showed a different aspect of the work/death/extermination camp.  (Auschwitz-Birkenau was all three.). 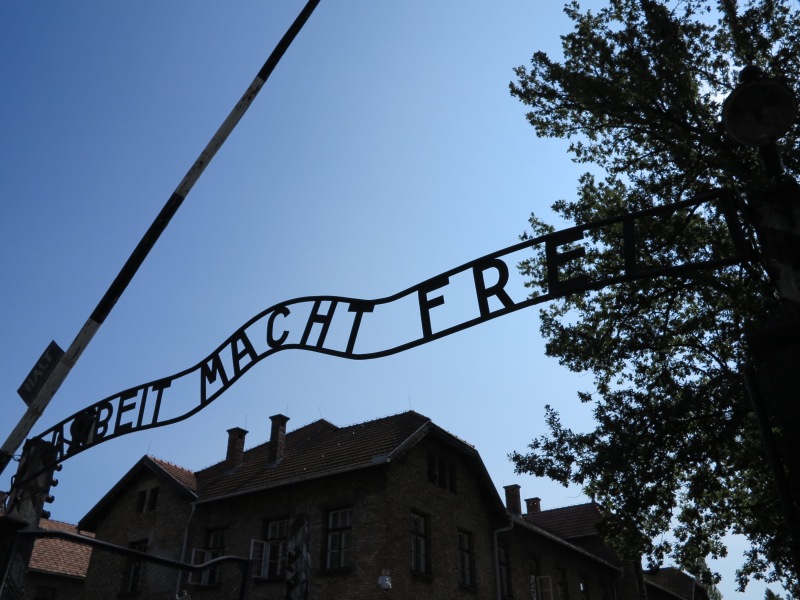 I was curious about the sanitation display or sleeping display, but I was sickened when we saw the mounds of possessions and personal items.  We saw heaps of shoes — some fancy shoes, some working shoes, some baby shoes.  We saw items like hairbrushes and shaving brushes, and shoe polish — just everyday items that people thought they’d need in their relocation.  Remember, they brought 50 pounds of goods with them.  When I saw these items, it just became too real.  I was overwhelmed with sadness.  Then, we came to a room that was piled high with human hair.  No, those hairbrushes would not have been needed because their heads were shaved and the hair was being transported to Germany to be used as stuffing and handcrafts.  Pictures of that display were forbidden to show respect.  As we left that building, I had to fight back the bile rising in my throat.  I thought I was going to vomit.  I was getting light-headed and tears were welling up.  It was an experience everyone needs to have. 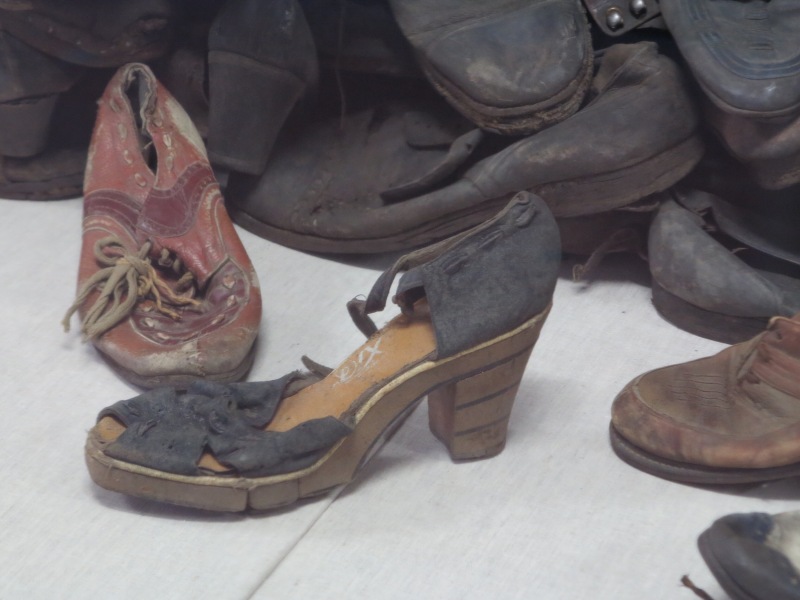 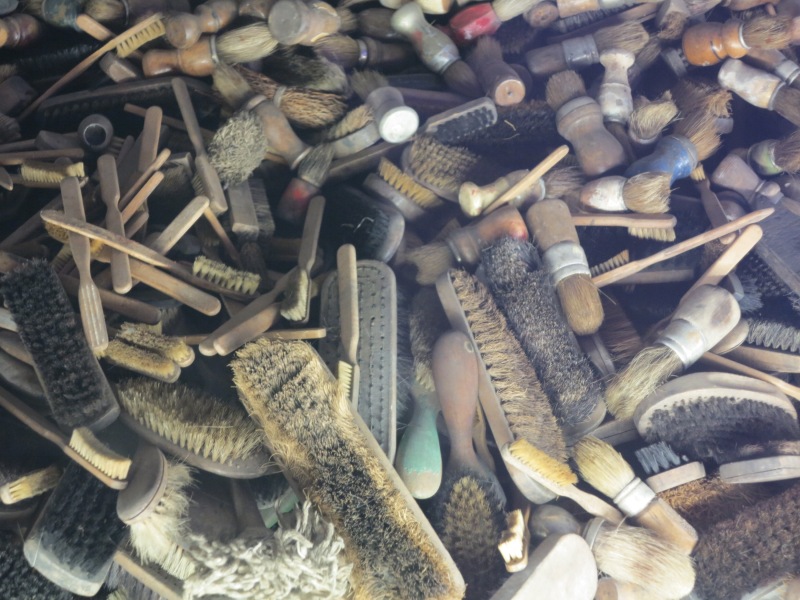 People who were chosen for work were sent to different assignments.  The most prestigious assignment was working in the “Canada” blocks.  The prisoners chose the name Canada because it symbolized a wealthy and free land.  Those that worked in Canada were the sorters.  They went through the items in the suitcases of the new arrivals.  Sometimes, they pocketed medicines or other useful items and took them back to the barracks to help others or use for bartering.  Of course, this was very risky.

Then, in another building, the walls were lined with photographs of the people when they arrived.  These were their identification photos.  Some people even tried to smile a little bit.  Most had blank expressions.  I could see these people chosen for work, strong and vibrant with a sparkle in their eyes and round faces.  The Nazis soon learned that the ID photos were useless to identify escapees because they looked so different after a short time in the camp.  That’s when tattooing started. 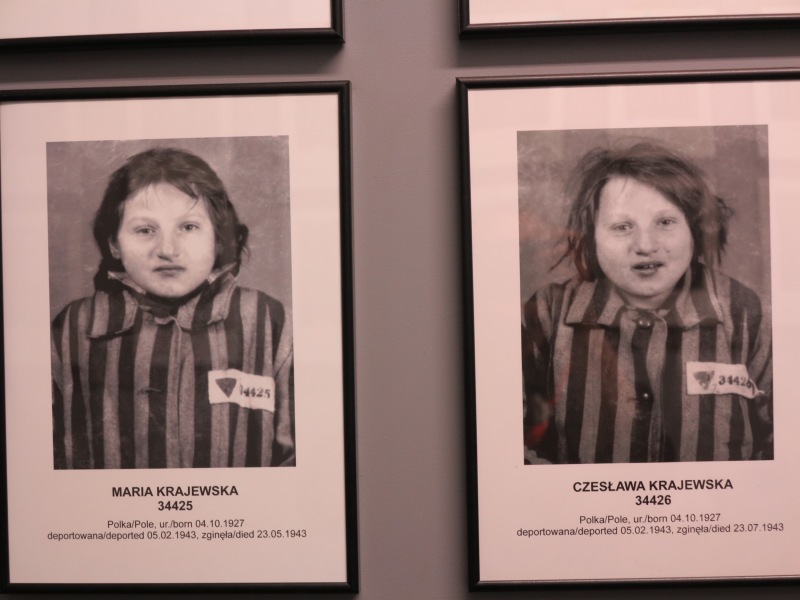 I am glad that I saw both Auschwitz and Birkenau.  Three years ago, we also went to Dachau.  What I appreciated about Dachau was that at the end of the self-guided tour, there was a space dedicated to each group that was targeted and victimized.  There was a clear explanation of what each symbol worn signified.  Many of the victims wore triangles, and each triangle was in a different color, denoting the victimized group.  The Jews wore the Star of David.  At Auschwitz, our guide just said there were different colours of triangles, but he didn’t seem to know which was which and he didn’t elaborate on the other groups.  He listed a few.  Yet, in the black and white photos, there were many triangles, but there was no mention of their colours below each photo.  This is an important element that needs to be a part of this tour.

Never forget the atrocities of humans.

One thought on “Auschwitz – Birkenau”